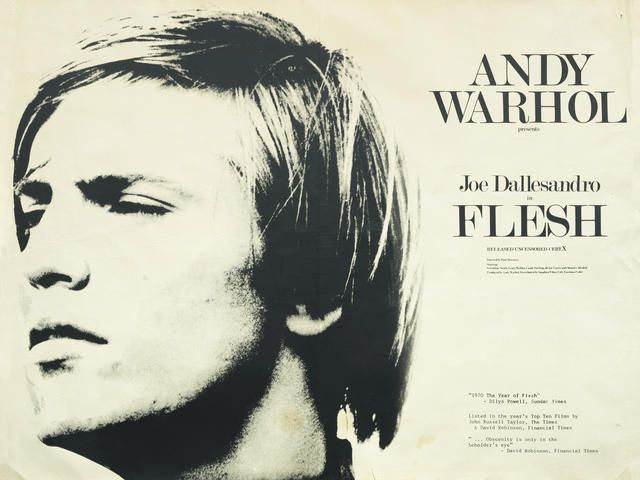 A rare original British quad cinema poster for Andy Warhol’s ‘Flesh’. This poster was produced for the limited UK release of the film, circa 1970 (the movies U.S. release date was 1968)

Flesh (or Andy Warhol’s Flesh) is a cult classic film, originally released by Factory Films and produced by Andy Warhol.  The film was directed by Paul Morrissey. Morrissey began his association with Andy Warhol in 1965 and directed a number of those films most closely associated with the Warhol name. Some of his director credits include; Chelsea Girls, Trash, Heat and Flesh For Frankenstein.

Legend has it that Flesh was conceived after a number of Warhols stars were featured in a party scene during the filming of Midnight Cowboy. Wanting to create a hustler film of their own the idea for Flesh born, with the intention of releasing it prior to Midnight Cowboy.

The Tate Gallery (who have a similar poster included in their collection) note of the film:

Released in 1968, ‘Flesh’ proved to be a major success, marking a turning point in Warhol’s films. Throughout his career Warhol made numerous movies, many of which were experimental and pushed the boundaries of what was considered acceptable in cinema. Yet Flesh was conceived, filmed and edited by the young film-maker Paul Morrissey whilst Warhol was recovering from gun-shot wounds. With it he bridged the gap between Warhol’s traditionally avant-garde films and commercial Hollywood. Featuring the lead character, Joe Dallesandro, prominently on the poster was a deliberate acknowledgement by Morrissey that the young actor’s photogenic looks would encourage viewers. Also, despite Warhol’s minimal involvement, including his name in the title draws on his celebrity as a marketing tool.