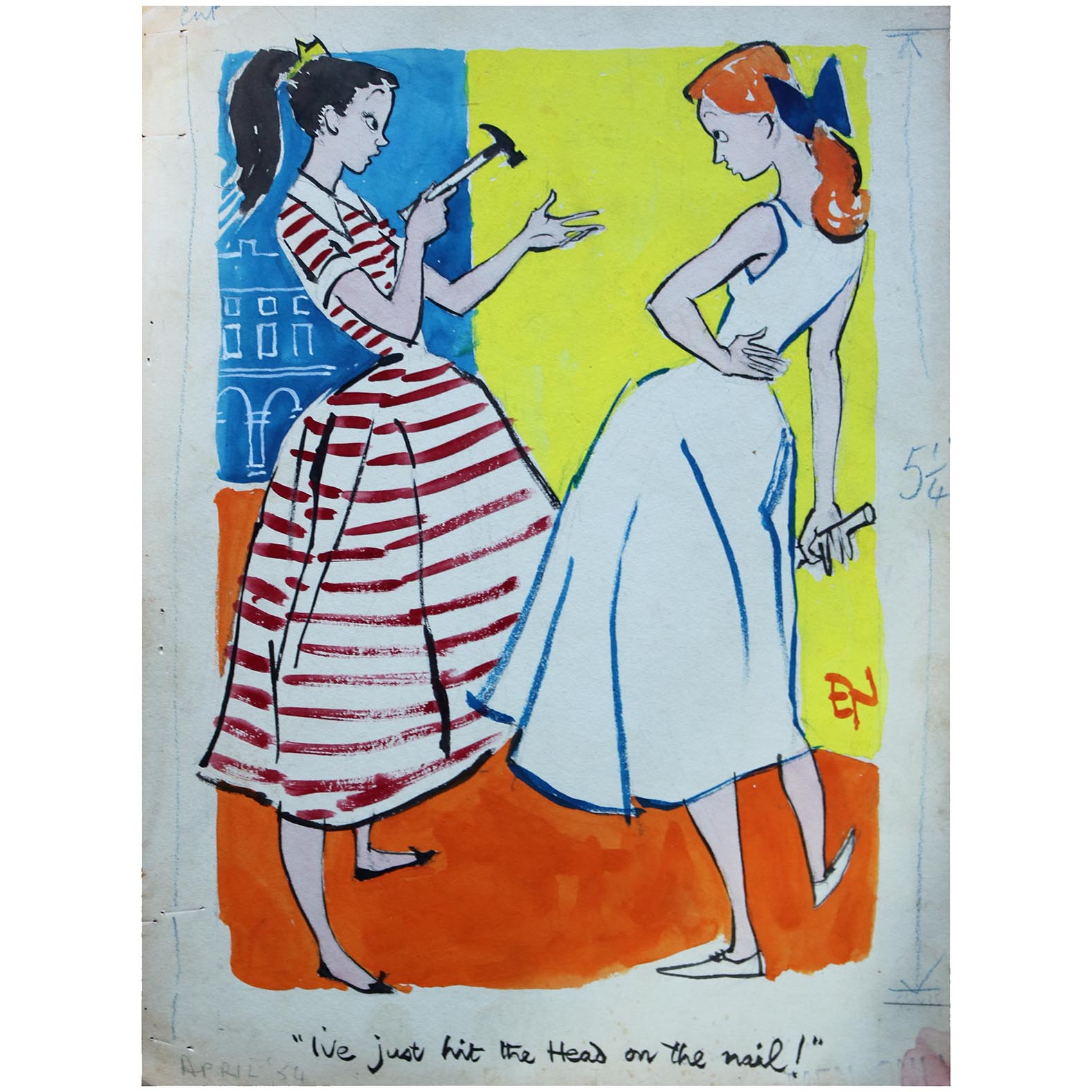 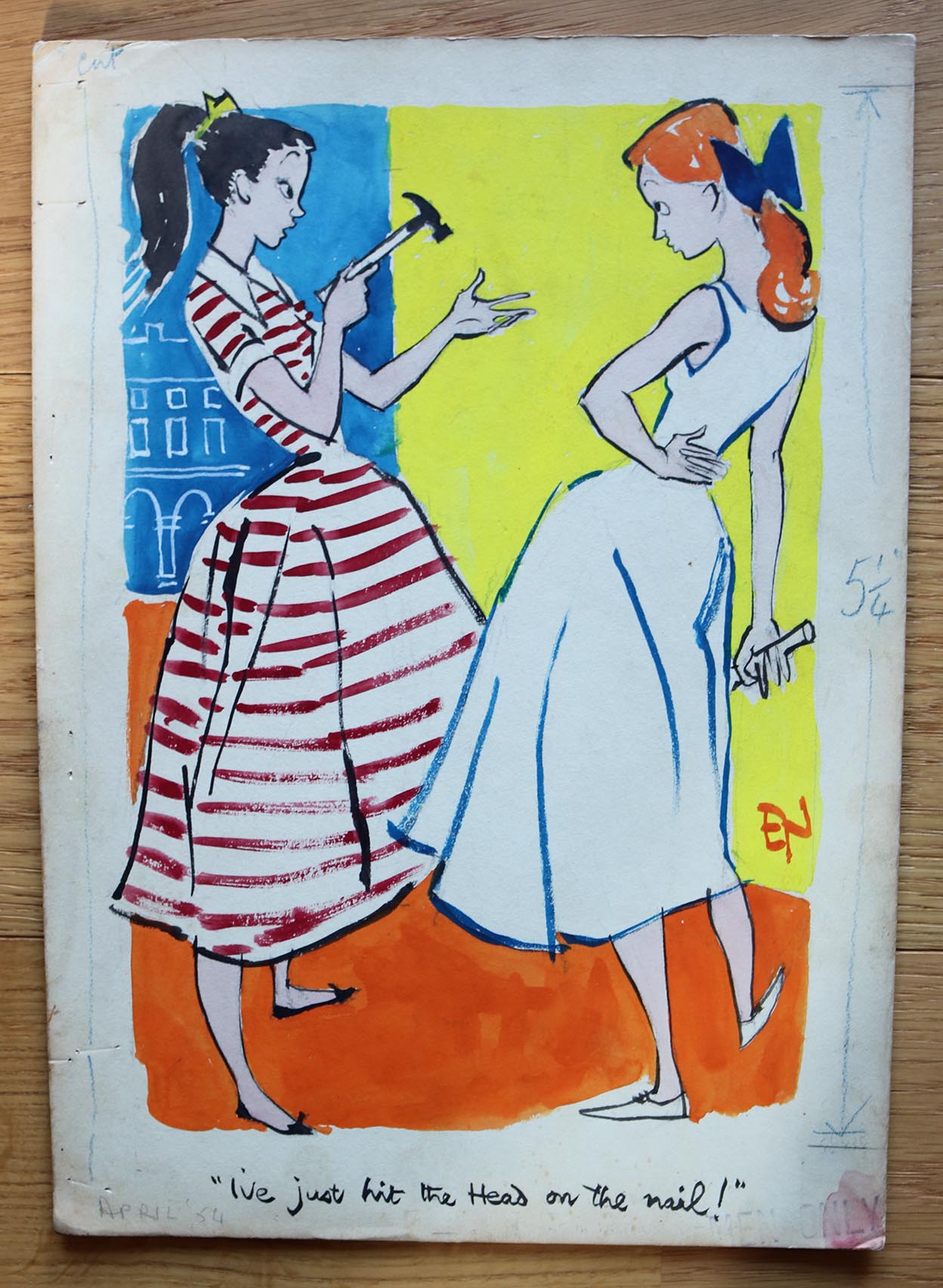 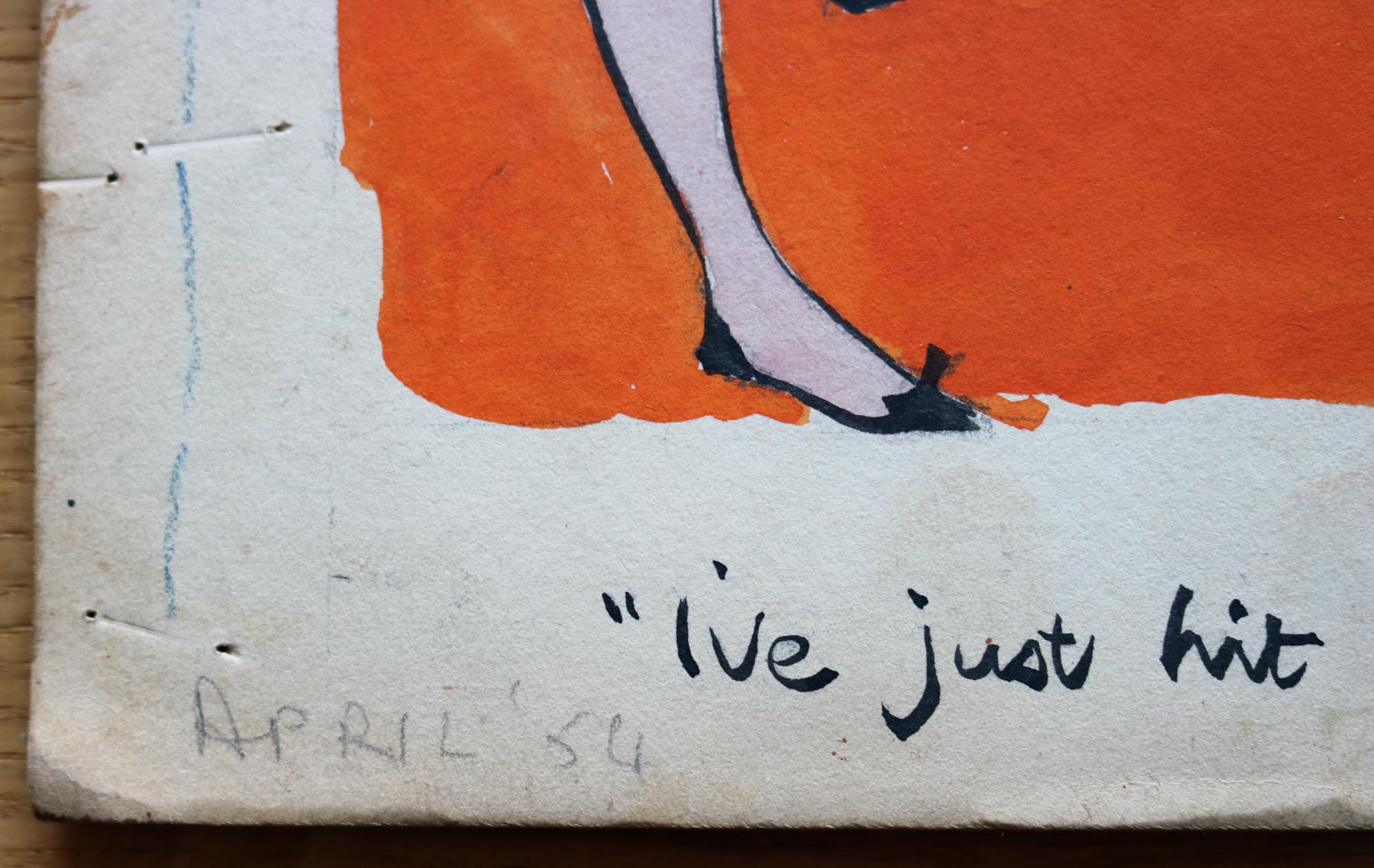 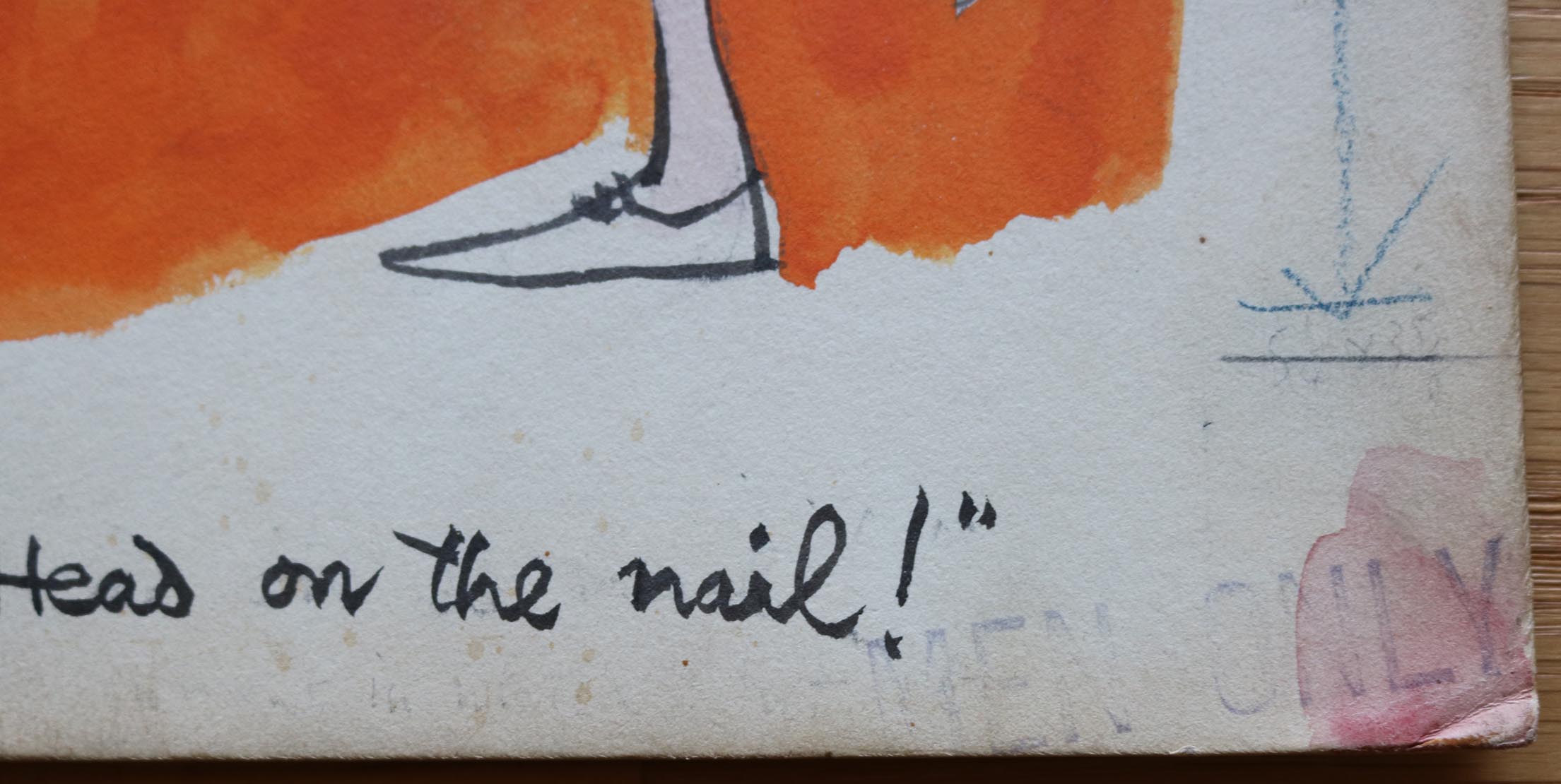 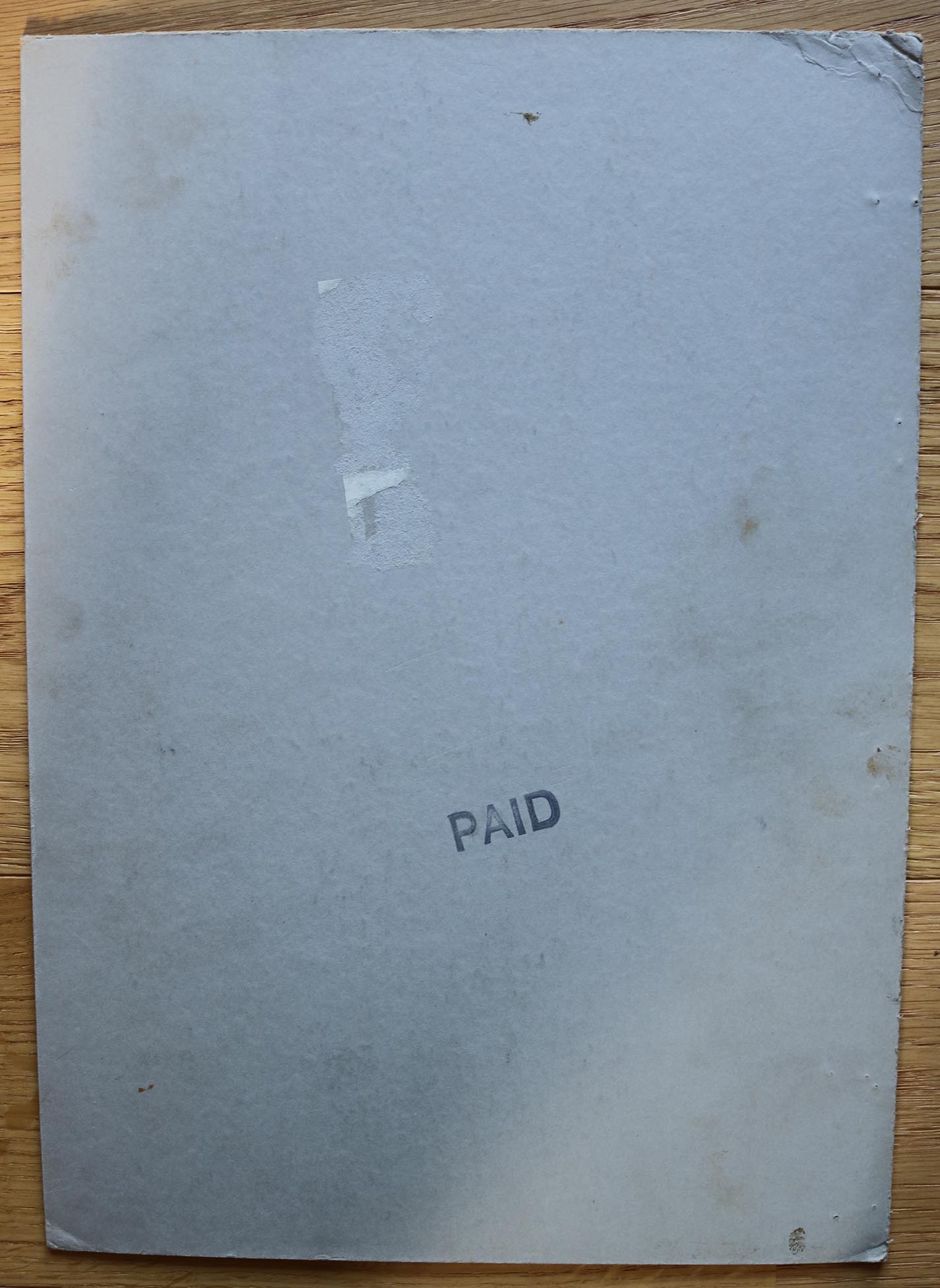 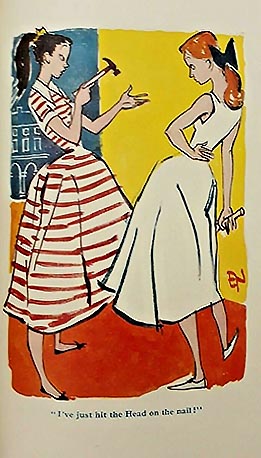 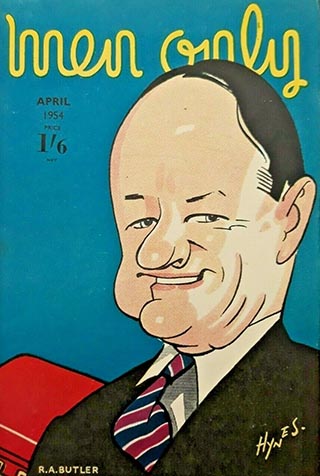 The painting is in ink and gouache on artists board. This illustration was produced for Men Only magazine and is typical of their humorous and risqué style. The work is initialled by the artist to right artwork “EN”.  Additionally dated in pencil to lower left “APRIL ‘54” and stamped “MEN ONLY” to lower right margin. The reverse bears stamp “PAID”.

Please see images showing the final appearance of the illustration in the April 1954 addition of the publication.

Condition report: Overall good condition and displays well, rounding and bumping to all corners, some general wear (see images). Original magazine not included with this item.

Edgar Norfield (1895 – 1977) was a British illustrator, cartoonist and painter. Originally born in Cambridge, he studied at the Cambridge School of Art and later Hassall School of Art in London. During his career Norfield, produced amusing and slightly risqué drawings for a number of magazines including Punch and Men Only. He frequently worked as an illustrator of both adult and childrens literature some of his most recognisable works are  worked included in books by Reginald Arkell, C.R. Benstead and Paul Gallico.

To watch Edgar Norfield at work for Punch see this British Pathe film:

Men Only magazine was founded in 1935 with the statement ‘We don’t want women readers. We won’t have women readers.’  The magazine focused on humour which was often risqué and included political satire as well as fiction.

During the 1940s and 1950s, the Men Only magazine covers featured caricatures of a prominent figure.  The artist Edward Sylvester Hynes (1897-1982) was frequently responsible for these designs. Heavily illustrated throughout, Men Only featured works by some of the leading caricaturists and cartoonists of the era, Edgar Norfield being among this number.

By the mid-1950s the magazine had begun to decline in popularity. Despite mergers with other publications including London Opinion and Lilliput the publication continued to fade.

By the early 1970s, Men Only no longer existed in its original form. The title was used for a relaunched magazine, part of Richard Desmond’s publication group, in 1971.

Further works by this artist are available to purchase in our store see EDGAR NORFIELD (1895 – 1977): An original vintage illustration of a stylised Edwardian lady, circa 1940s

Condition Report: Overall good condition and displays well, rounding and bumping to all corners, some general wear (see images). Original magazine not included with this item.

EDGAR NORFIELD (1895 – 1977): An original vintage illustration of a stylised Edwardian lady, circa 1940s
SCANDINAVIAN DESIGN: Original 1960s Swedish Glasmäster Markaryd Round Brass Porthole Mirror
This website uses cookies to ensure you get the best experience on our website. Find out more