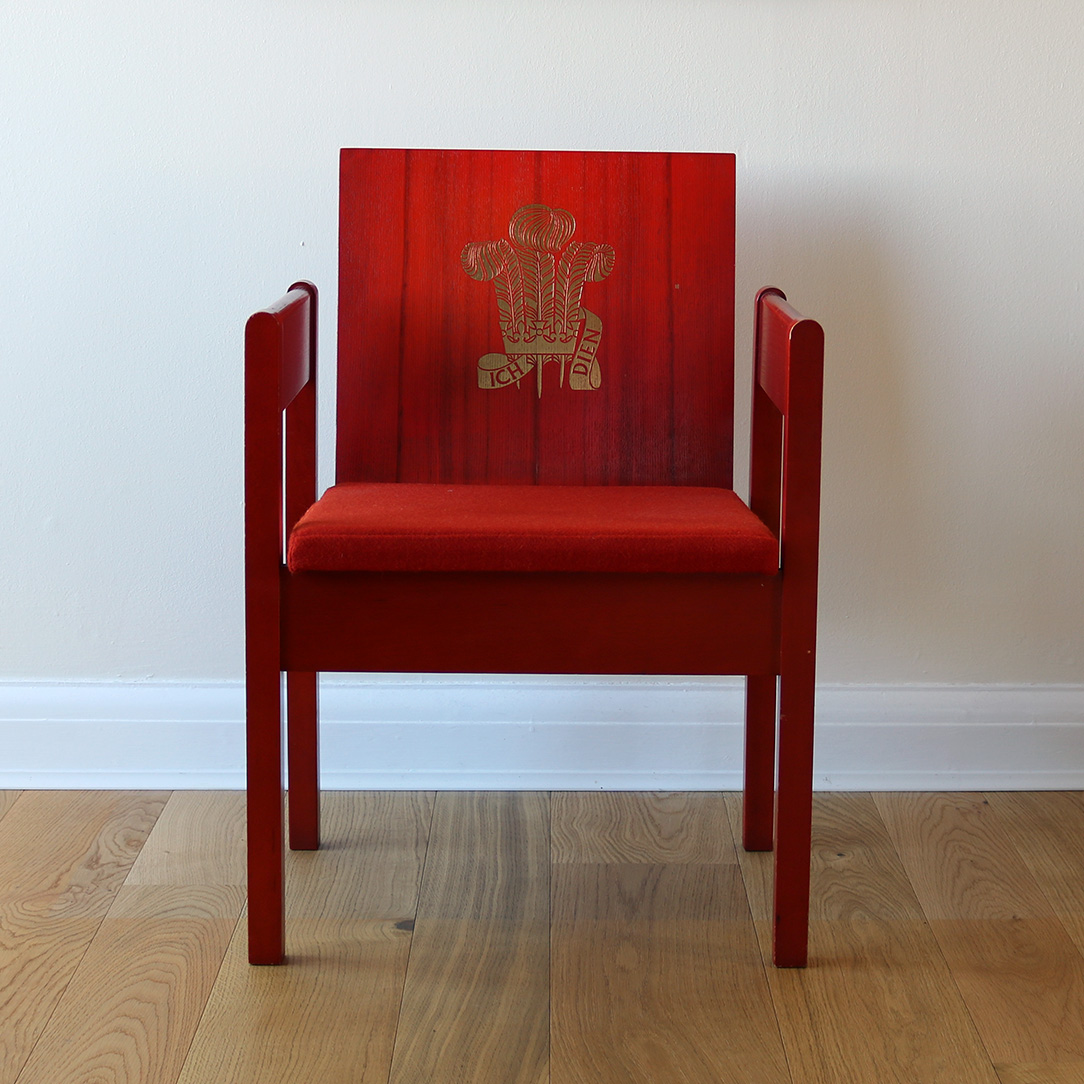 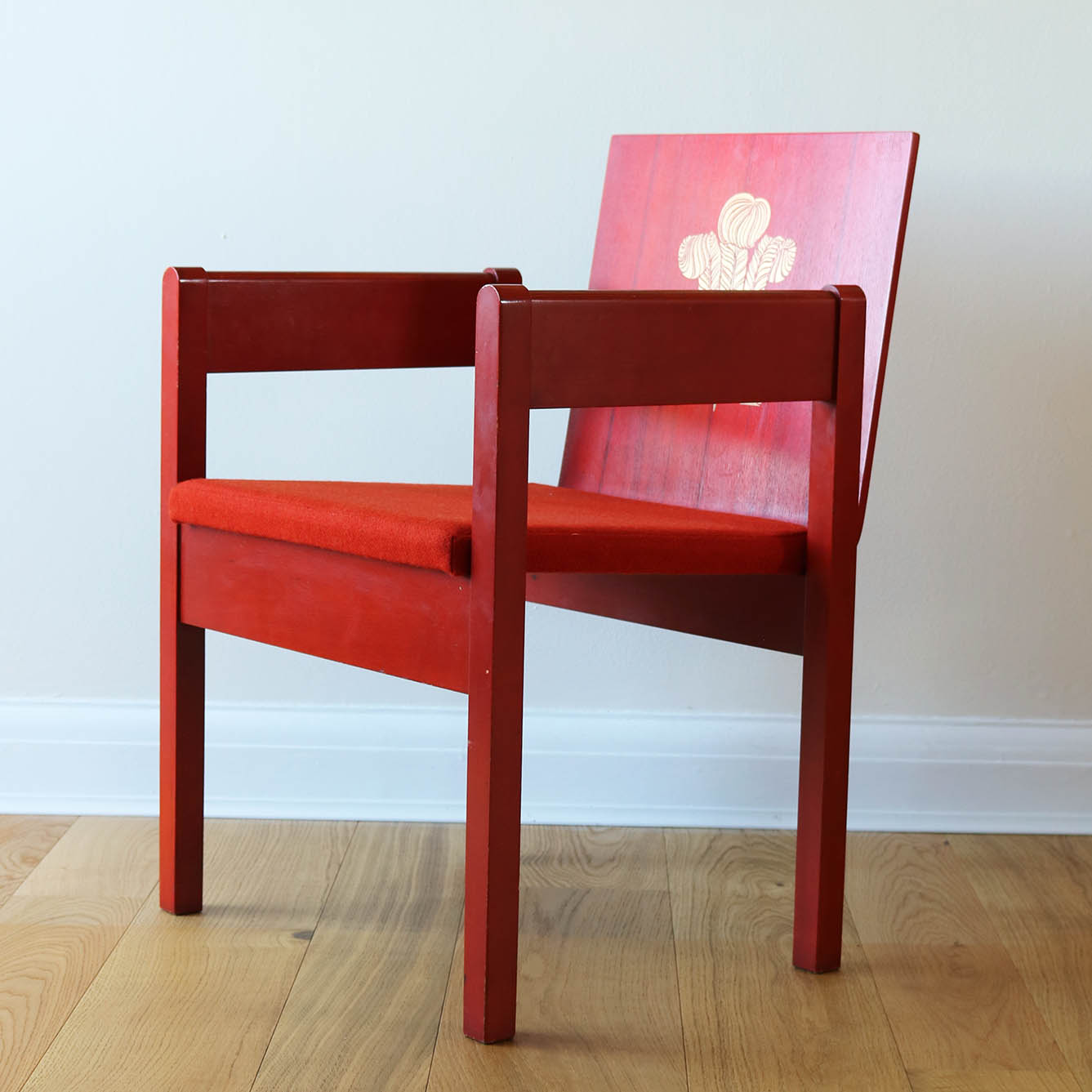 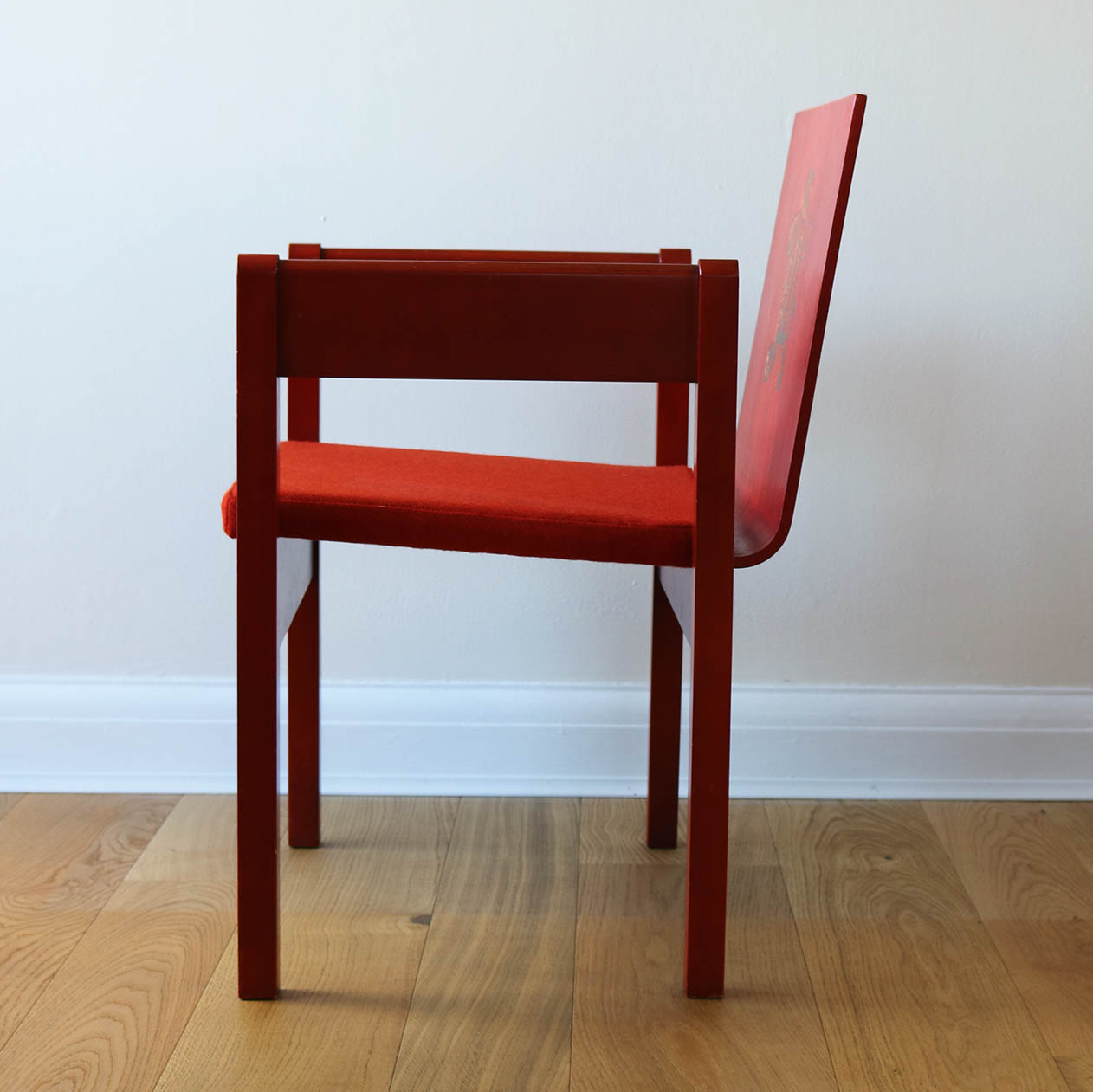 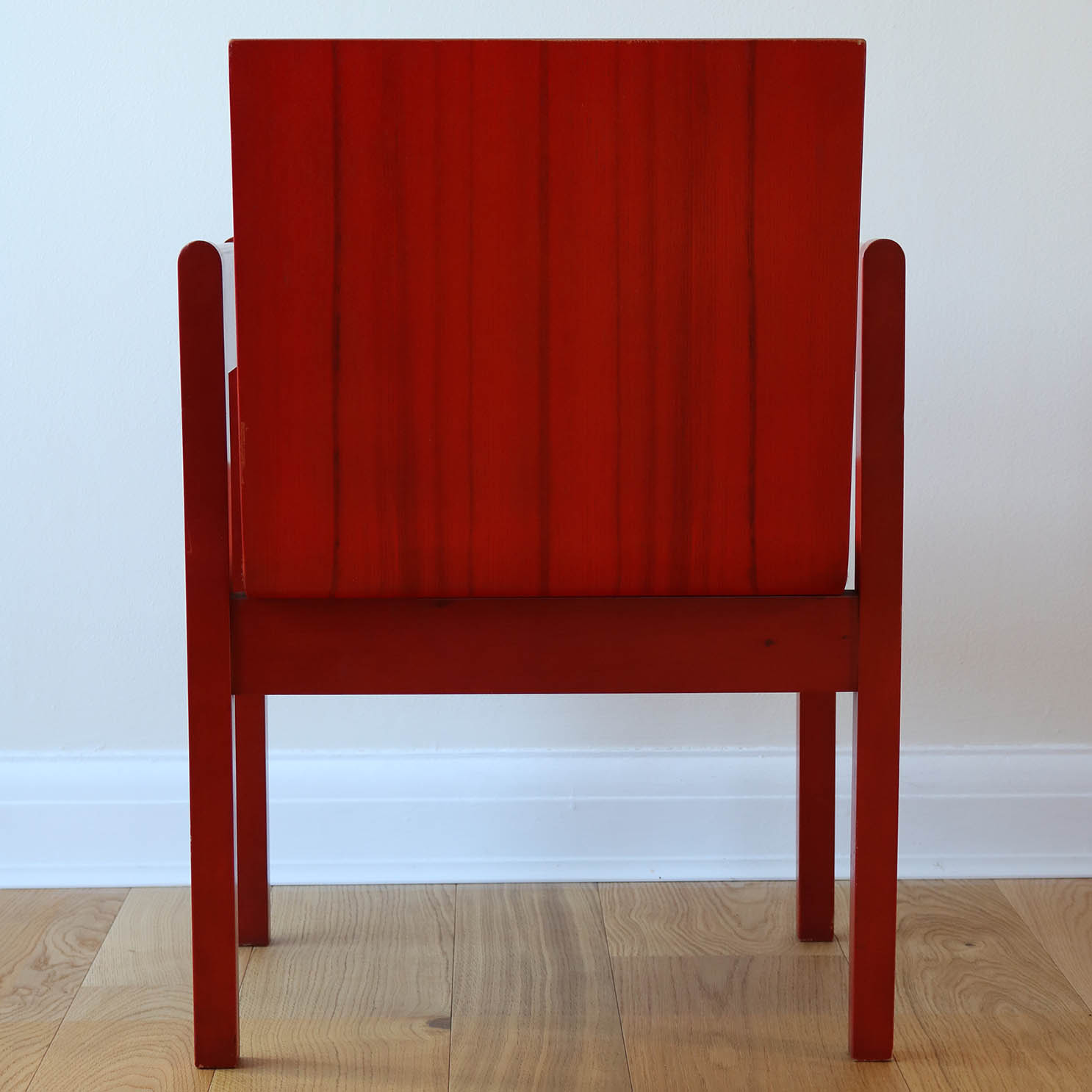 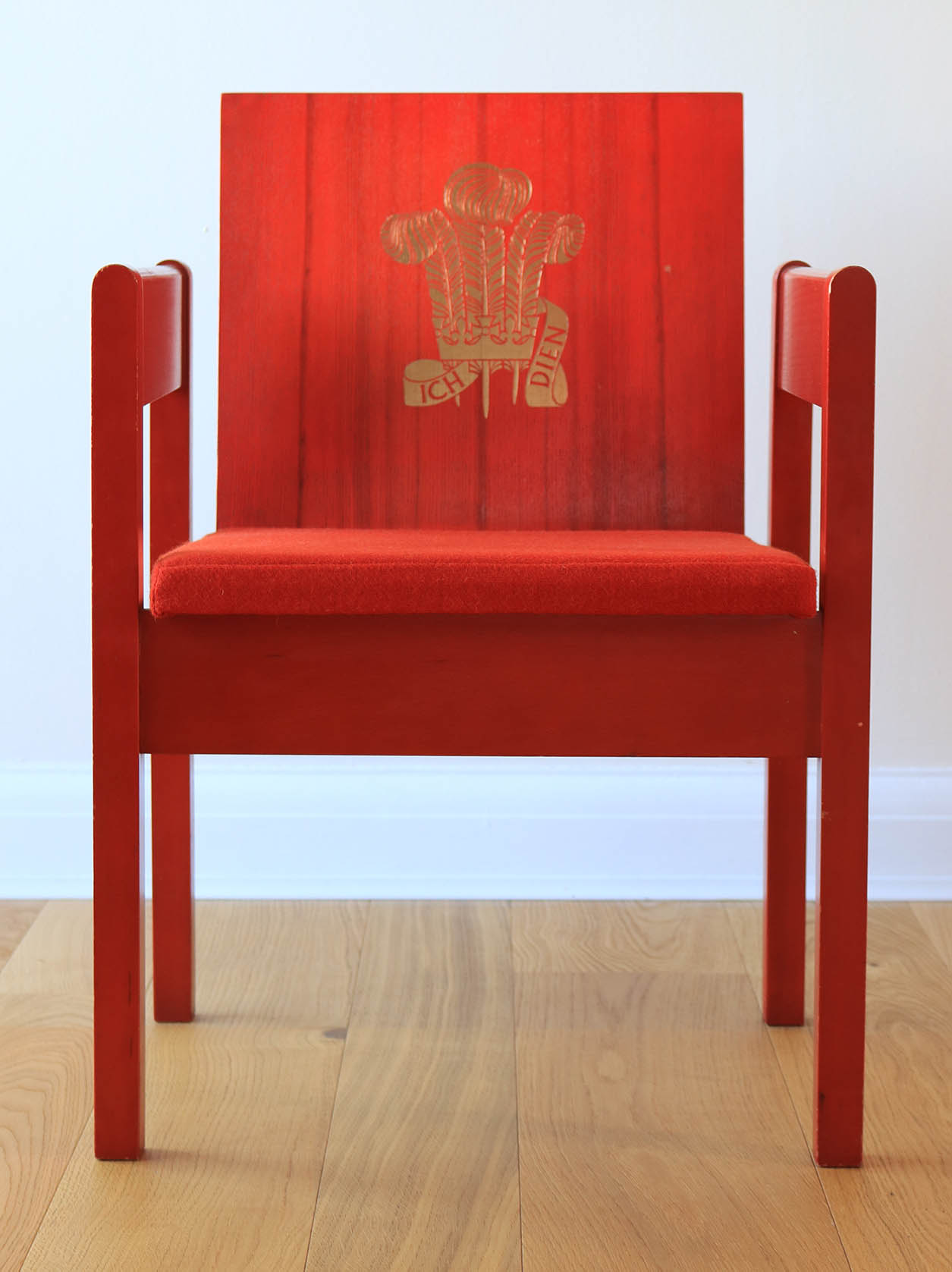 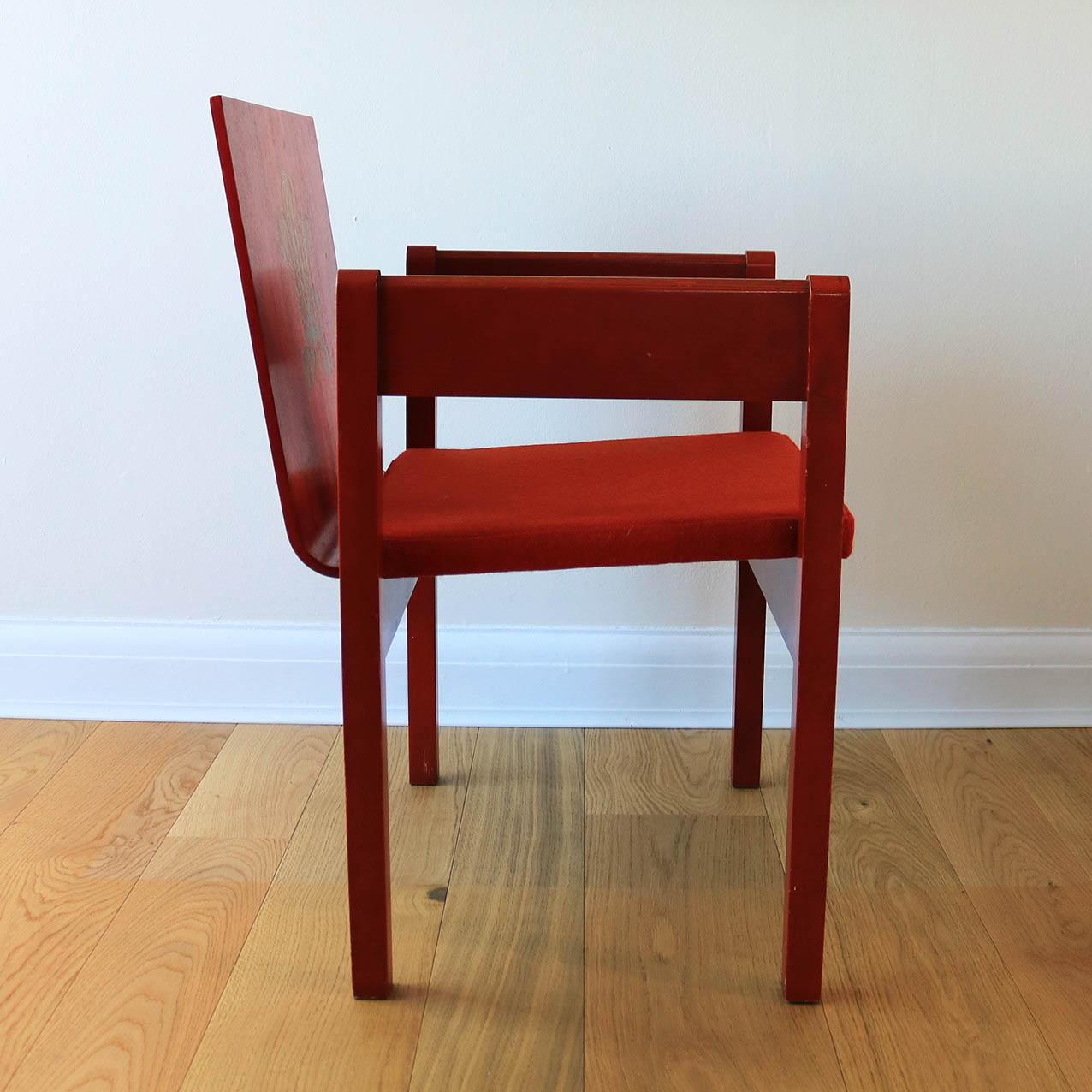 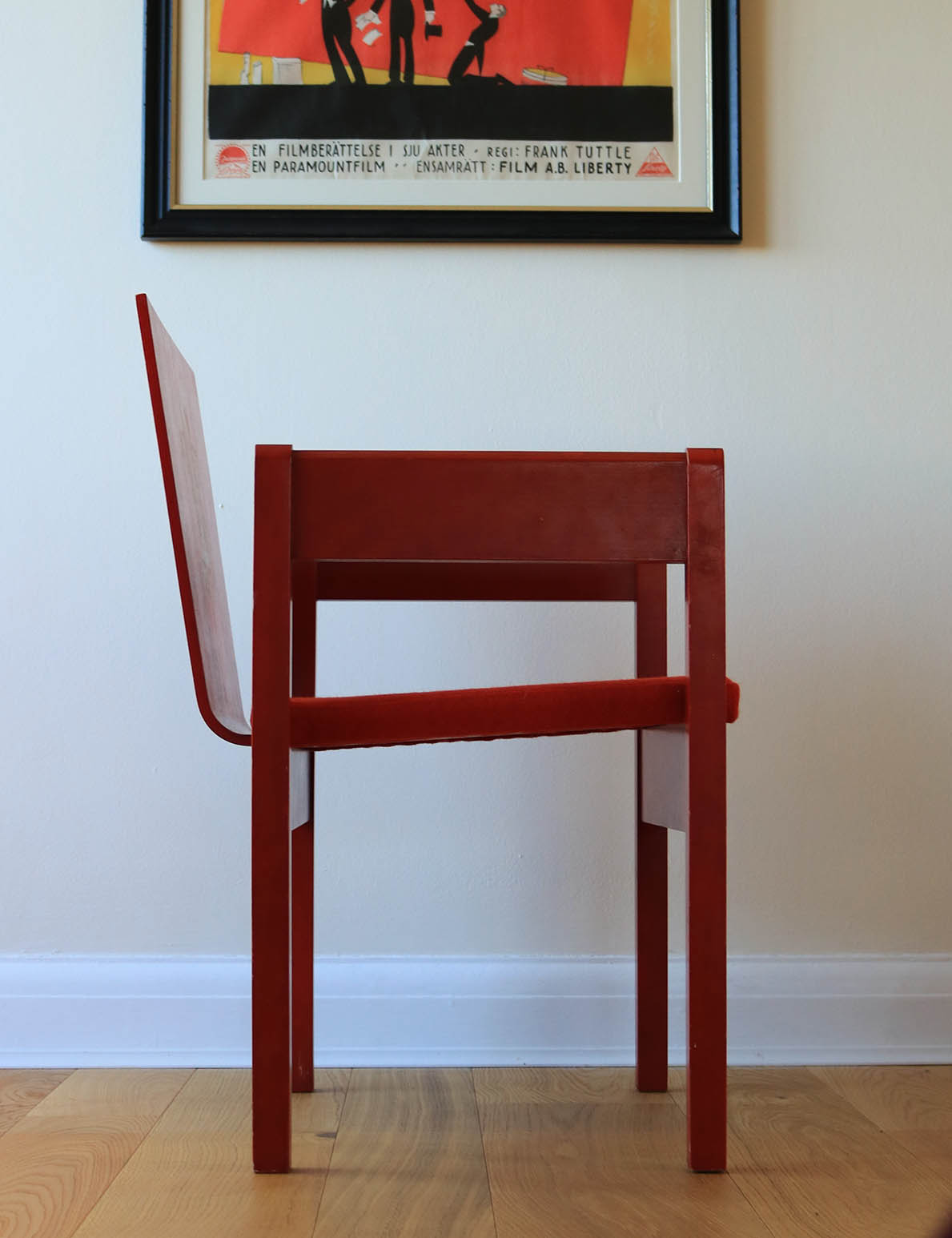 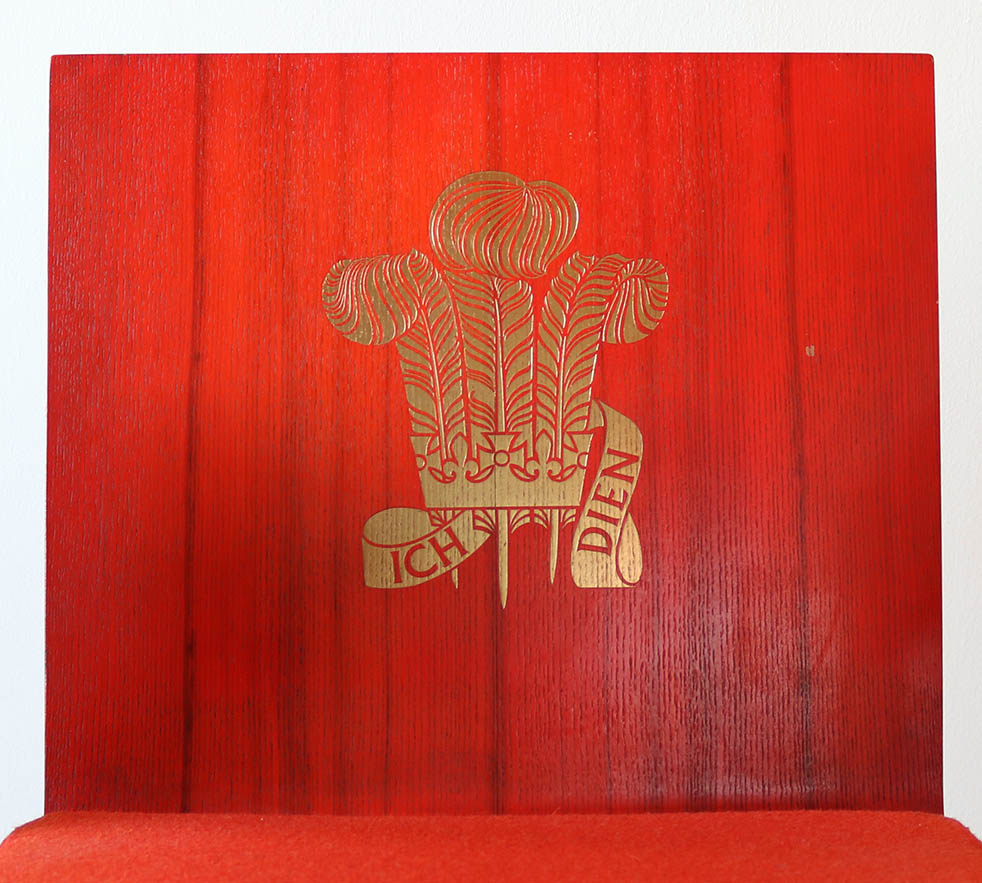 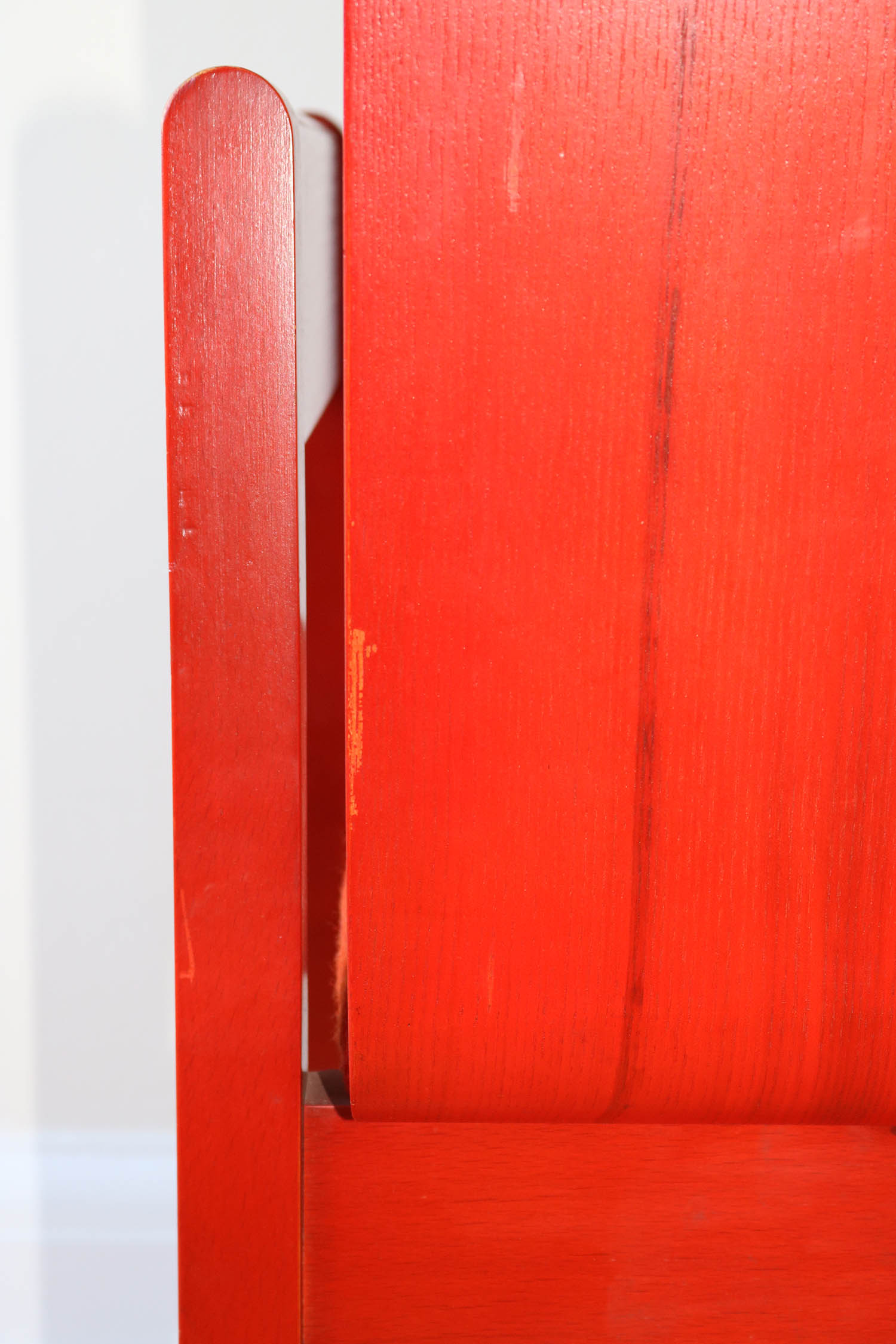 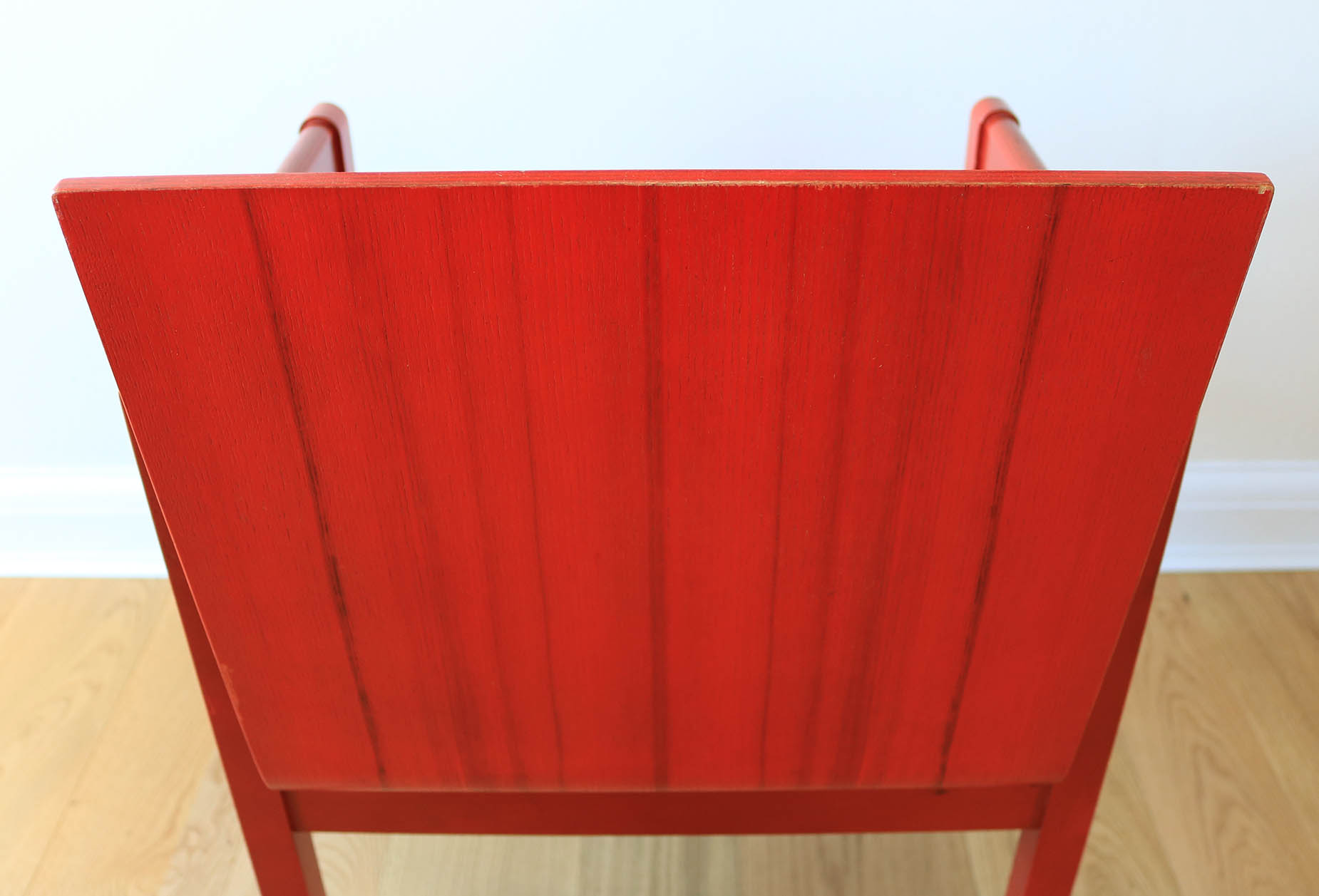 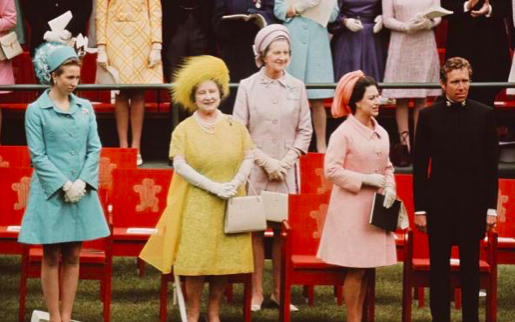 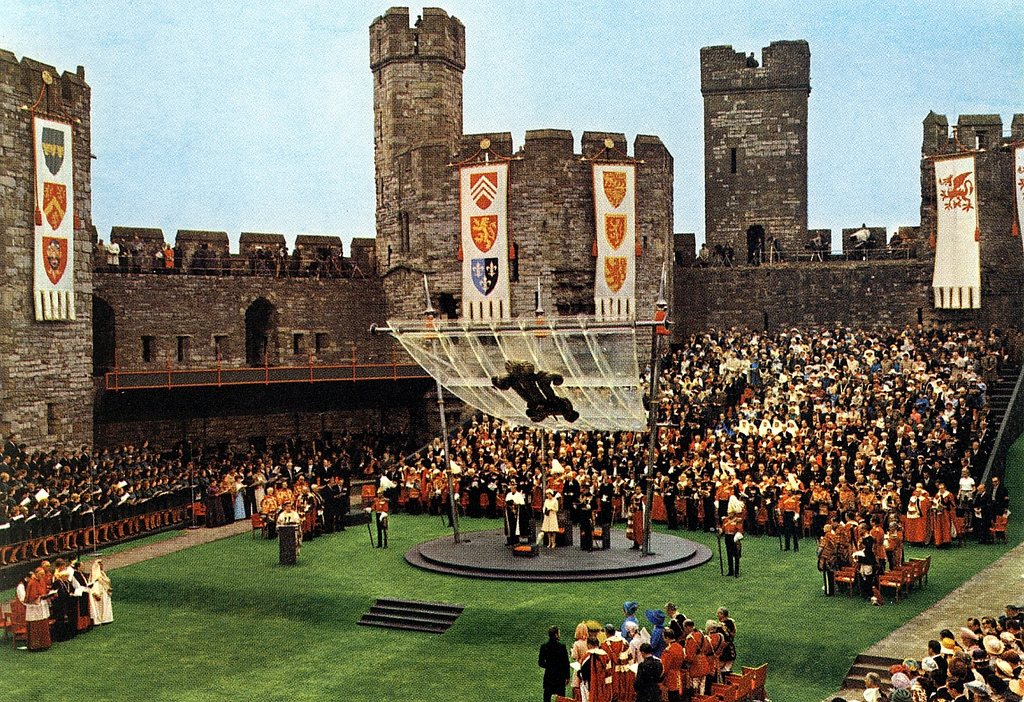 These Investiture chairs were designed by Anthony Armstrong-Jones – 1st Earl of Snowdon (1930-2017), Carl Toms (1927-1999) and John Pound (Ministry of Works), and manufactured by Remploy.

The chair frame is red stained ash laminate plywood and red painted elm. The Prince of Wales feathers motif embossed in gilt to backrest, bearing motto ICH DIEN (I Serve). These chairs were manufacturers by Remploy, the manufactures stamp impressed to underside of the seat.

The seat cover has recently been reupholstered in red Harris tweed.

The Investiture of Prince Charles as Prince of Wales took place at Caernarfon Castle, North Wales on 1st July 1969.

Her Majesty The Queen recruited her brother-in-law, Anthony Armstrong-Jones – 1st Earl of Snowdon, to over see the hugely important design of the ceremony. Lord Snowdon’s creative team included Carl Toms, a British costume and set designer and John Pound, a brutalist designer employed by the Ministry of Works.

The team were given a tiny budget of £50,000 to create what could be best described as a set, to be built within the walls of the Castle. Their intention was to produce a design which appeared to be steeped in Royal history, whilst contemporary and appealing to modern television audiences.

These red Investiture chairs were designed to be used by distinguished guests, including Princess Margaret and the Queen Mother. The chairs were produced in bright vermillion red, to complement the theatrical look of the entire event. Some of the original designs for the ceremony, can be found in the National Archives at Kew.

All 4,600 chairs produced for the ceremony were produced at Remploy (an organization which employed a disabled workforce in a welfare to work scheme). The original fabric seat cover (lacking here) was made of Welsh tweed. After the Investiture ceremony these chairs were available for guest to buy, at a cost of £12 each. Similarly to the Coronation ceremonies,  the recouped costs helped pay for the occasion.

Lord Snowdon kept a number of chairs in his own home (as featured in the World of Interiors, January 2009 issue). A pair of Investiture chairs previously owned by Lord Snowdon sold at Christies Auctioneers in September 2020 for £43,700.

To watch highlights of the original ceremony and to see the chairs in use this link to a British Pathe film from 1969 https://www.youtube.com/watch?v=v01LWt40SnA

An almost identical chair can be found in the National Trust collection: http://www.nationaltrustcollections.org.uk/object/1170774.2

Condition Report: We have recently had the chair reupholstered. The original seat cover has been replaced with modern Harris tweed wool (in a very similar colour to the original fabric), the foam has additionally been replaced to comply with modern fire safety standards. The chair is in overall very good condition, some surface paint loss to back of arm rest section, wear to top of seat back, some other minor scuffs and marks in accordance with age and use. (see images).