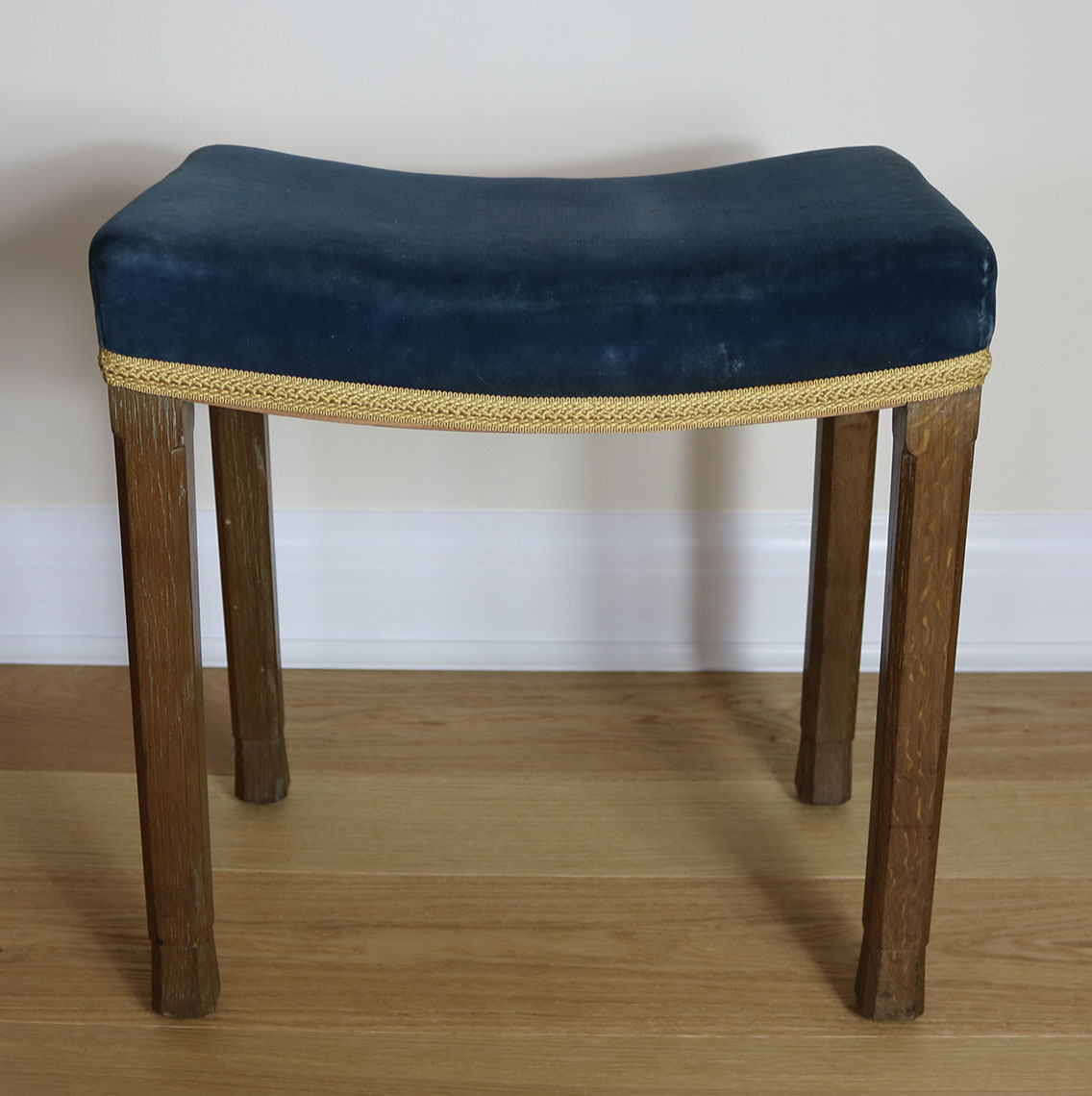 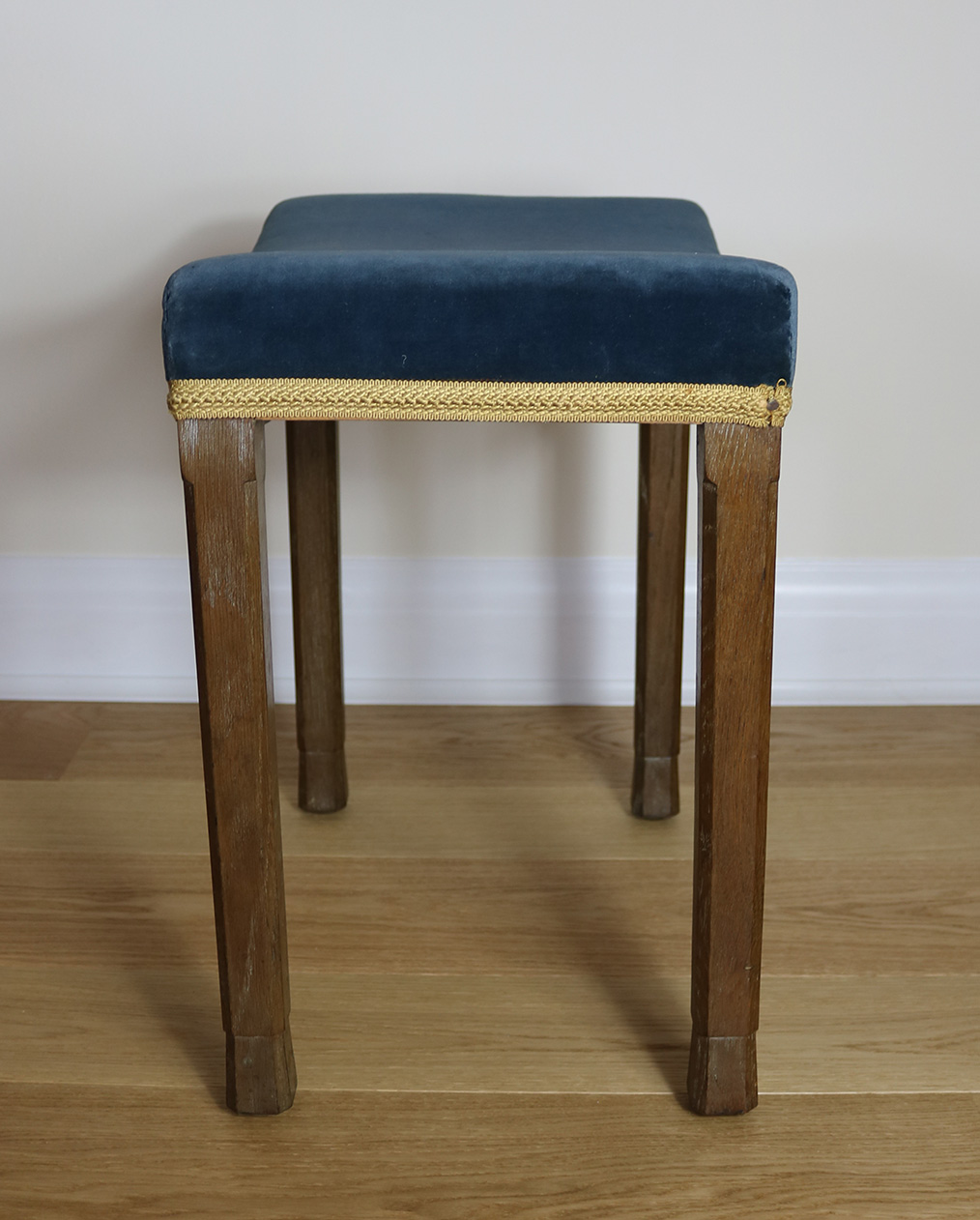 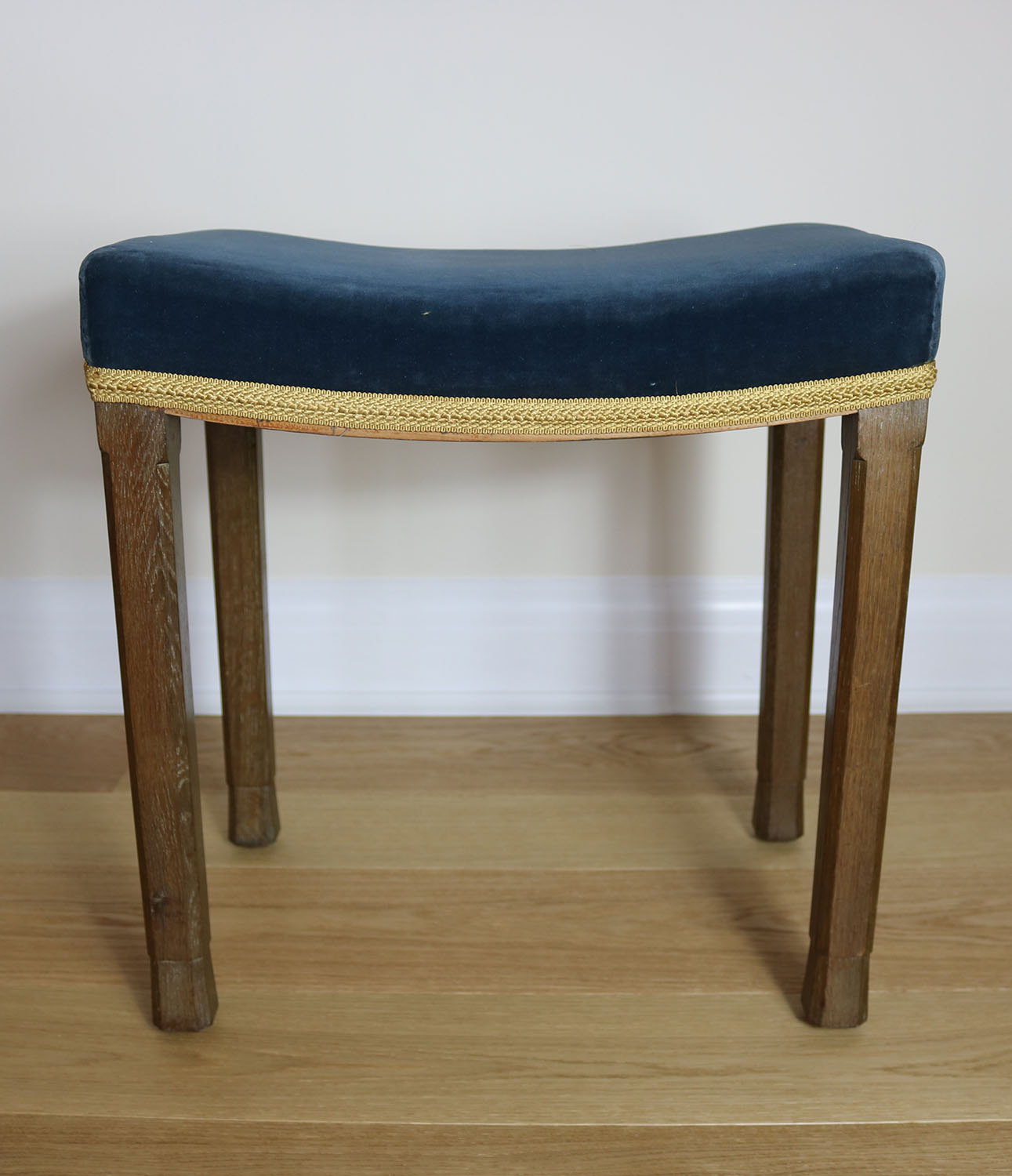 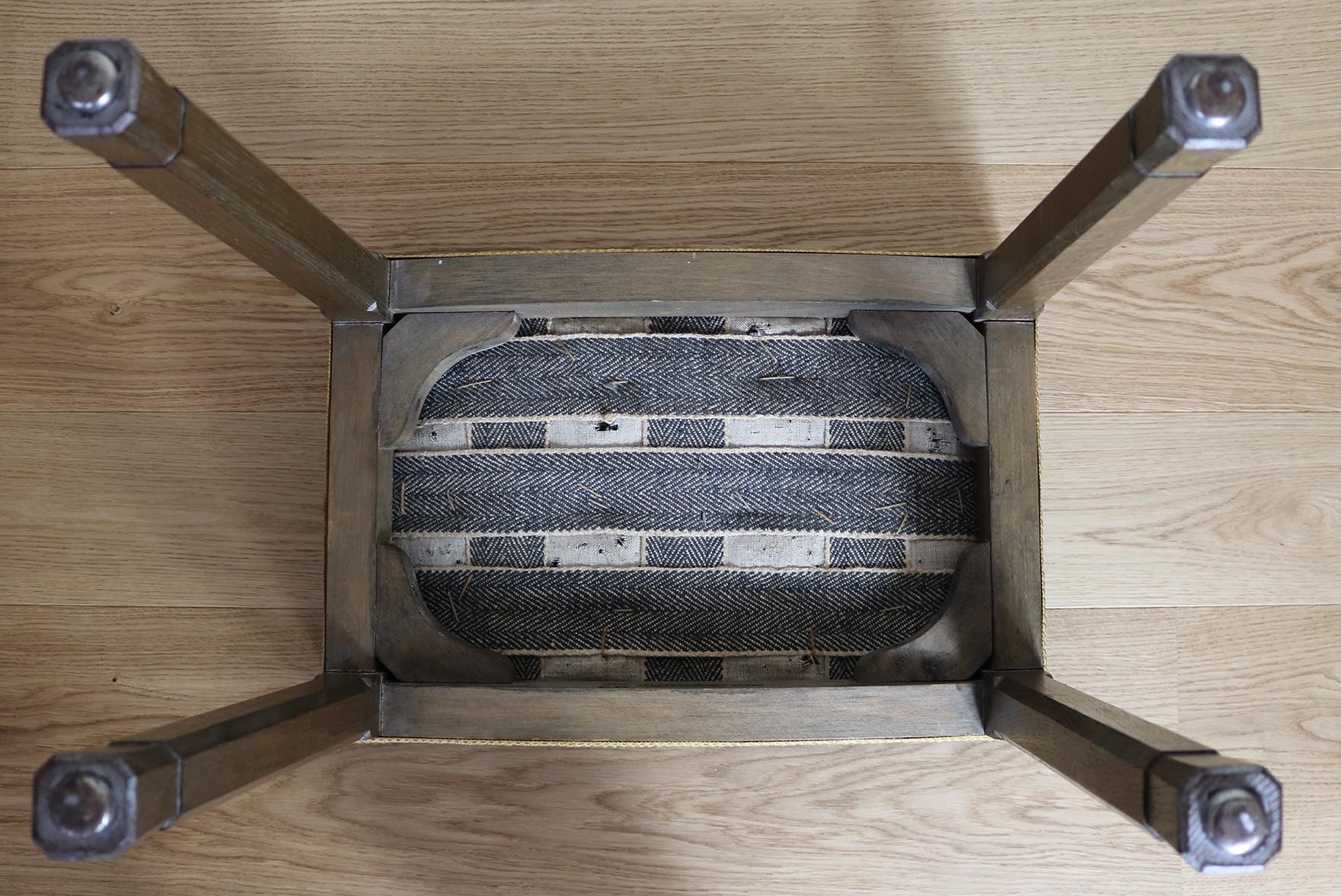 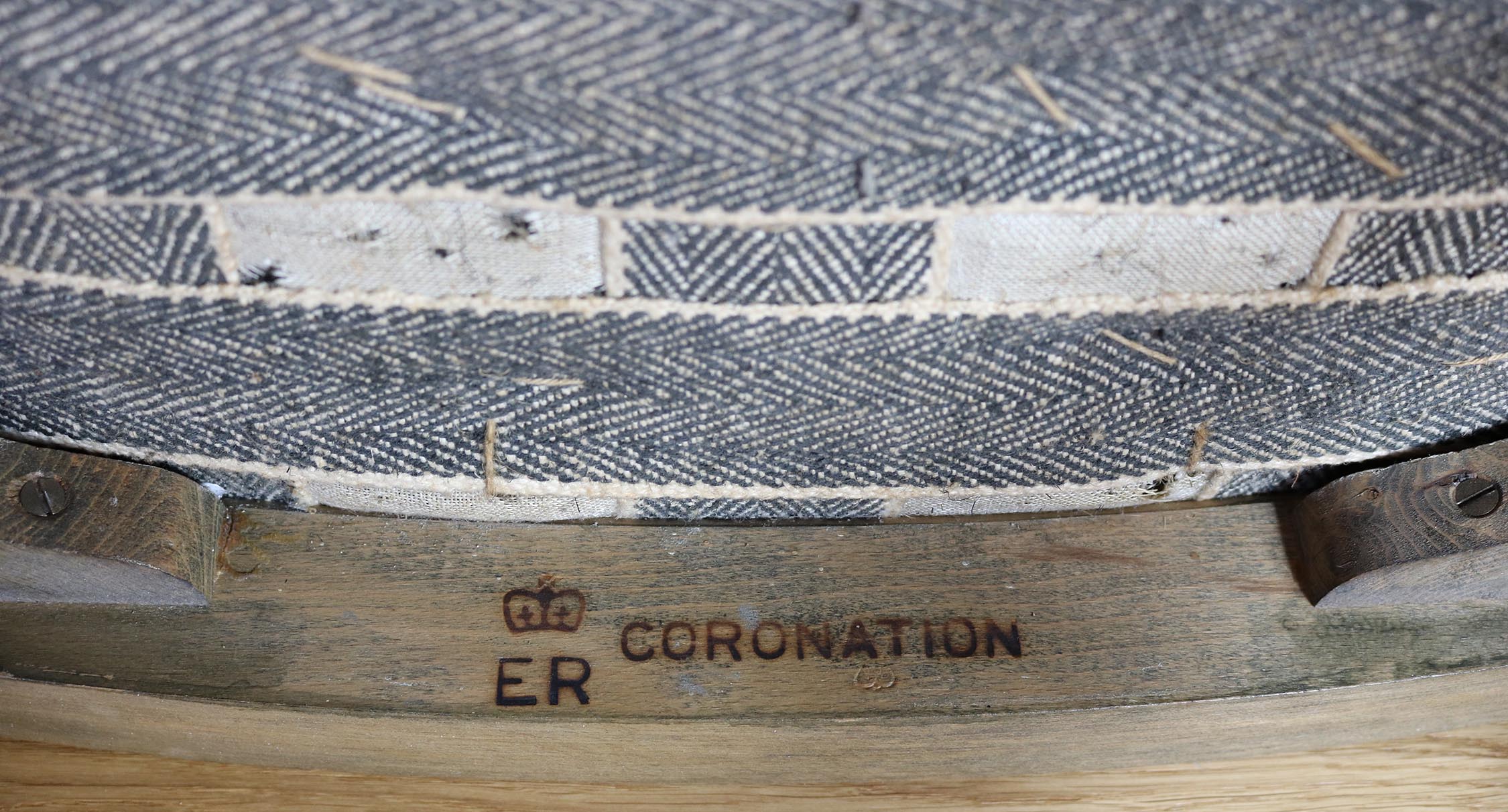 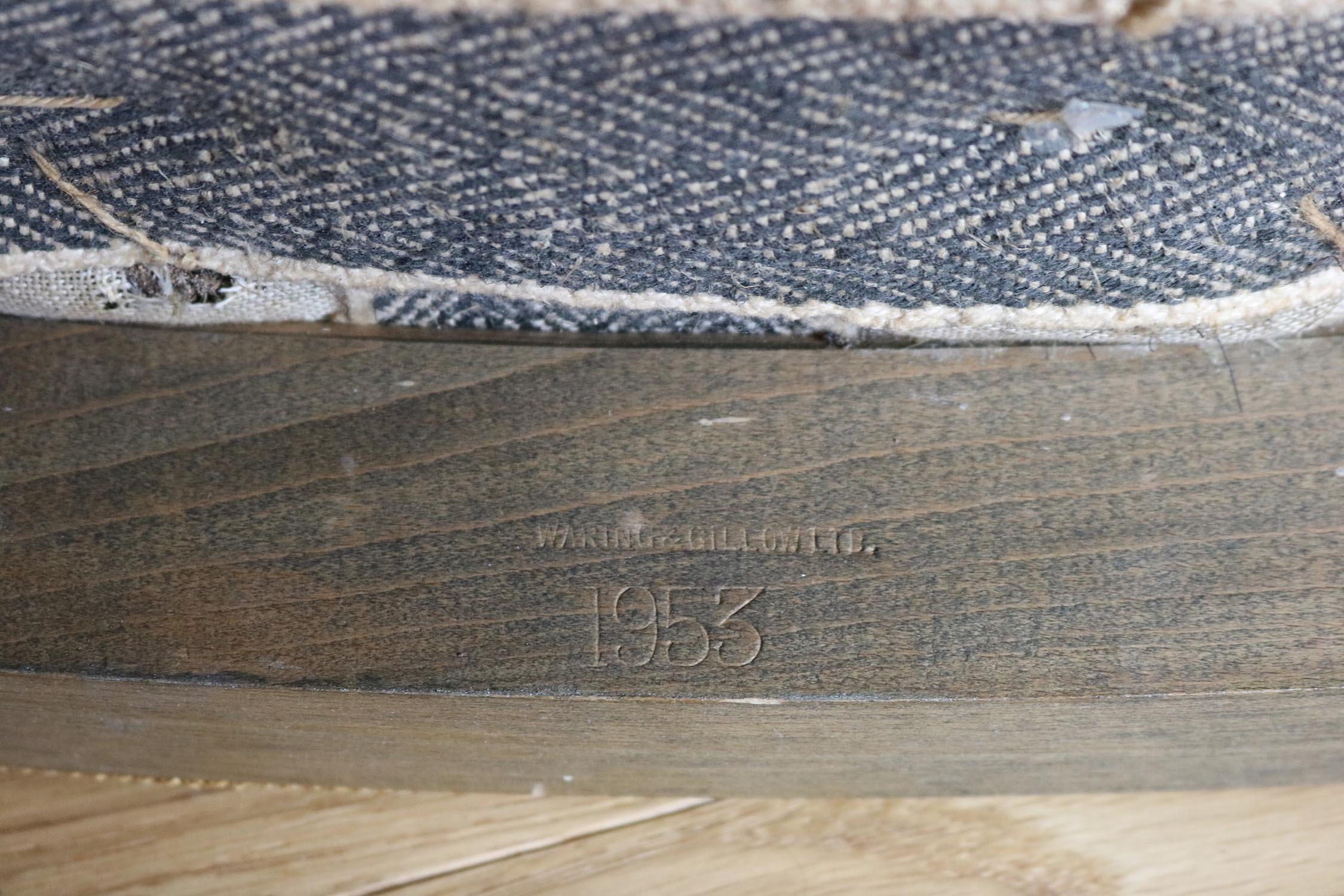 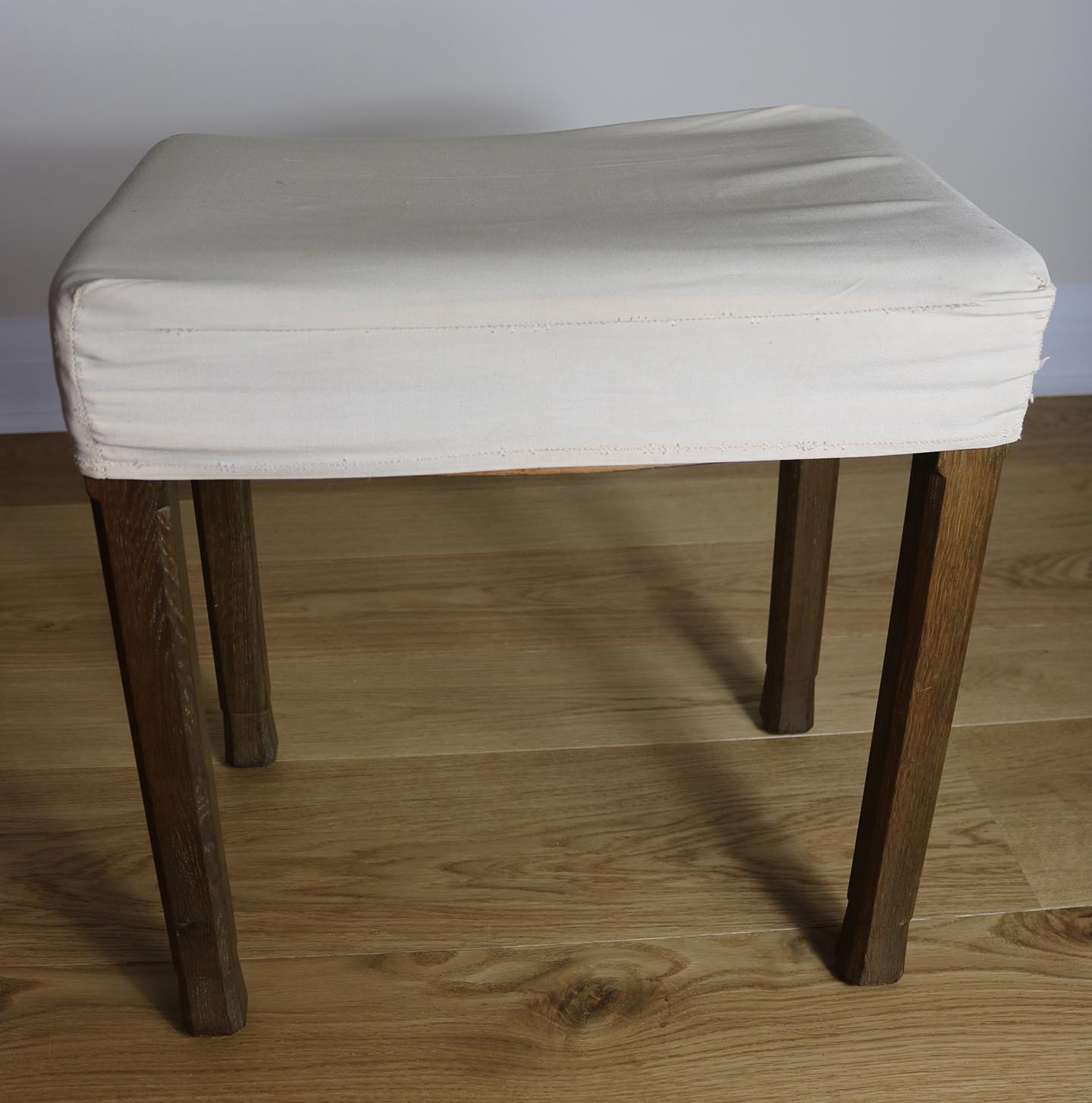 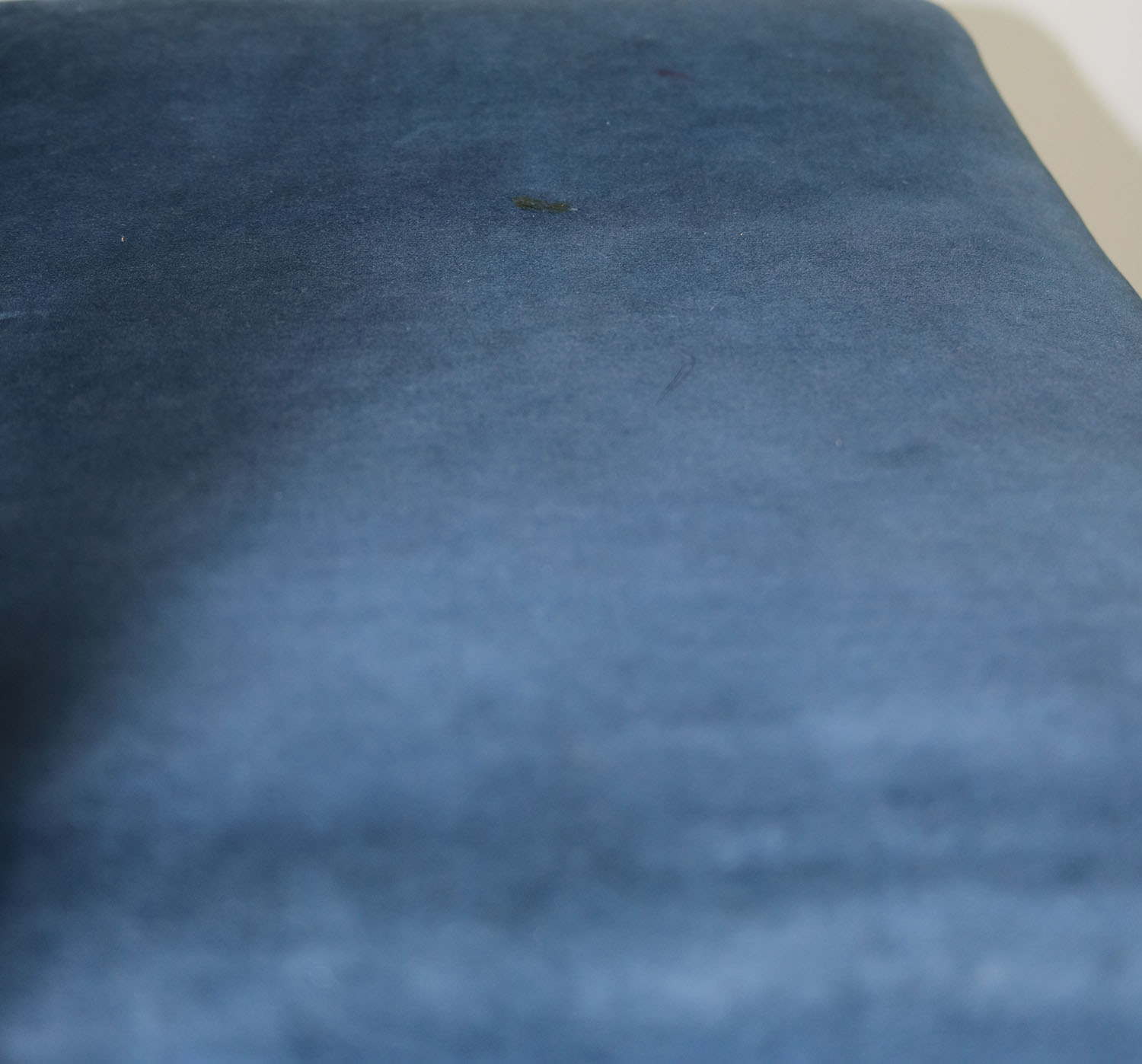 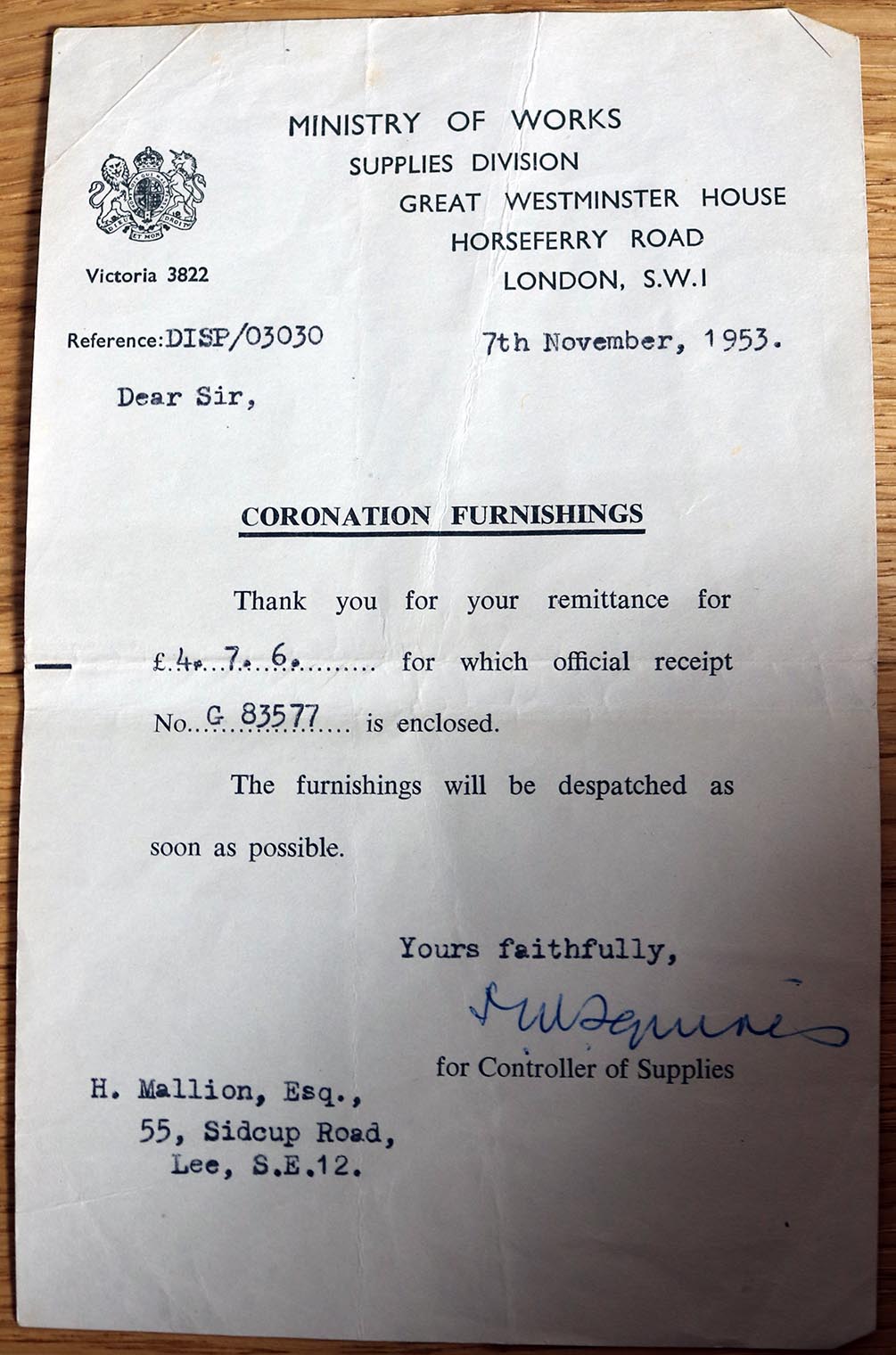 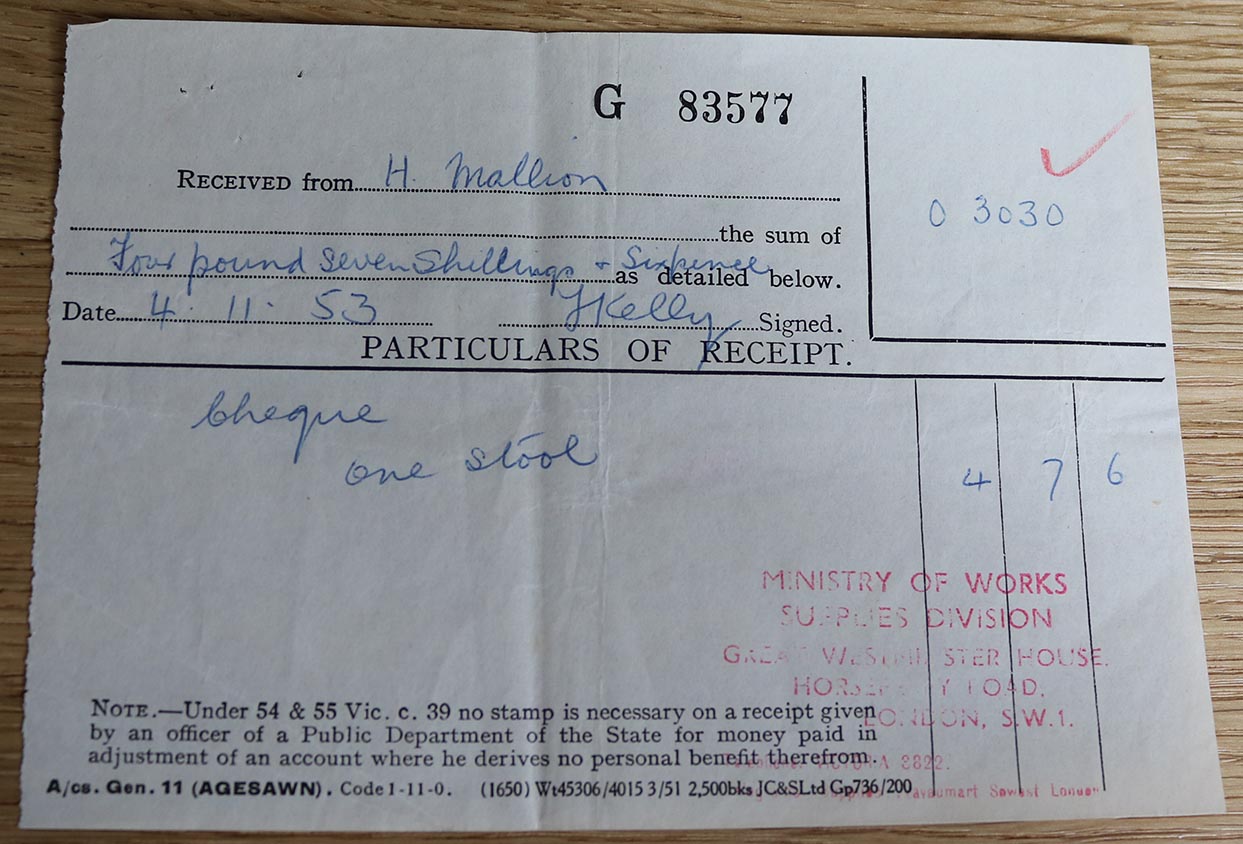 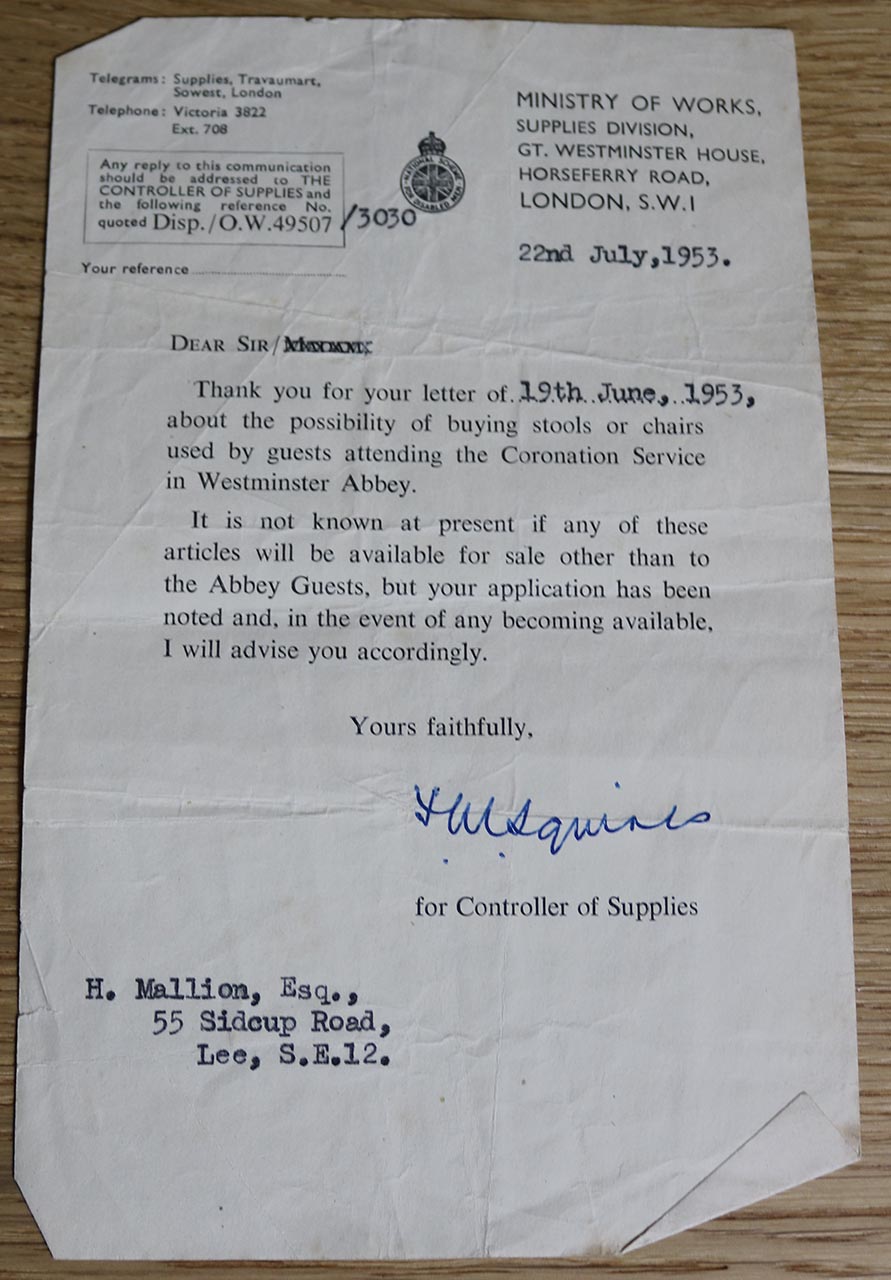 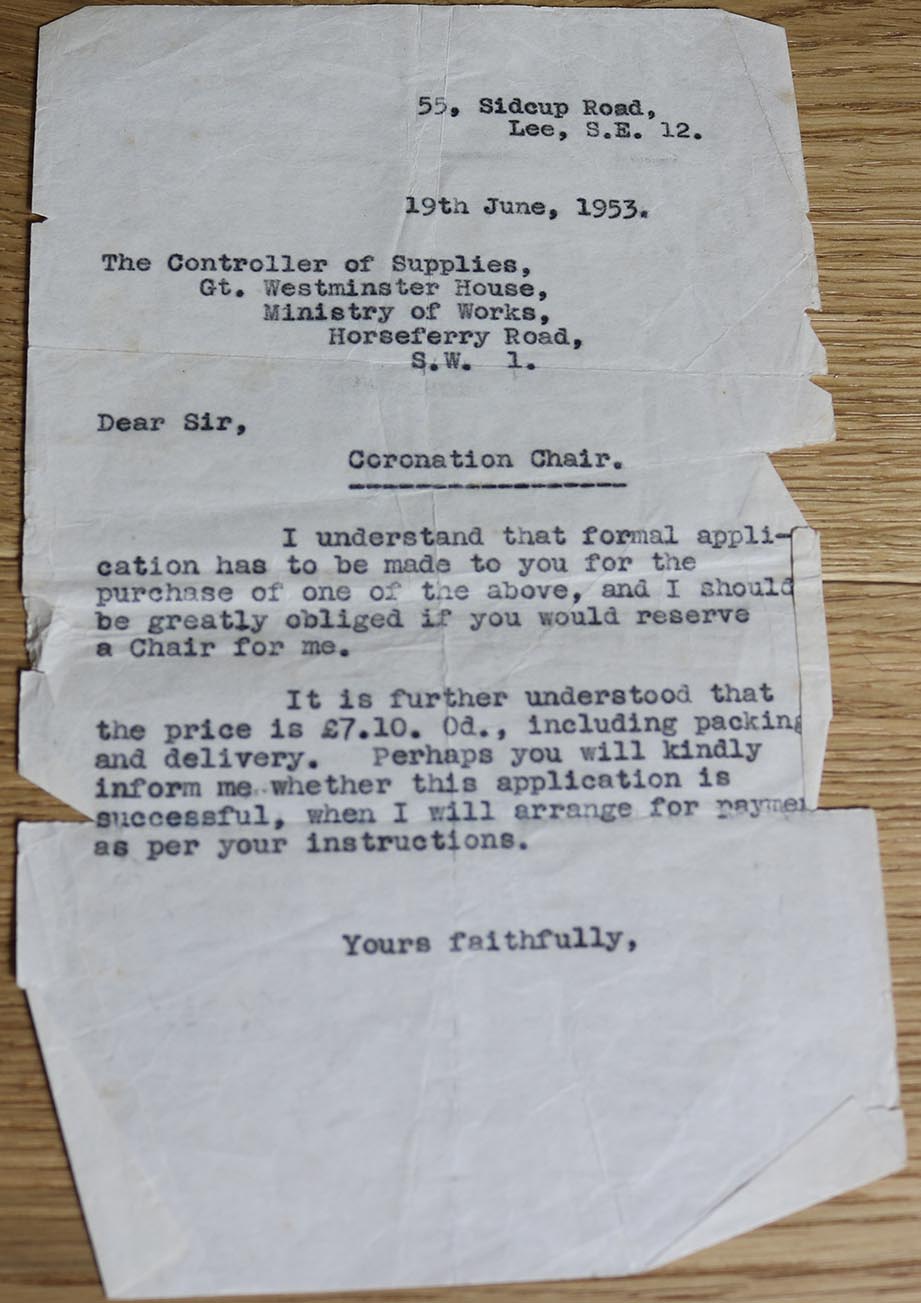 ROYAL MEMORABILIA: An original HM Queen Elizabeth II Coronation stool, 1953, the limed oak frame with upholstery in blue velvet, trimmed with gold braid, underside stamped with makers name “Waring & Gillow Ltd” and additionally with ‘CORONATION’ and EII monogram, “1953”. This stool has a bespoke cotton dust cover, which it is believed it original to the stool.

Additionally included with the stool are a number of correspondence documents represent a detailed provenance. The letters between the previous owner and the Ministry of Works relate directly its original acquisition in 1953. The provenance includes 5 pieces relating to; an original receipt, letter of initial enquiry, confirmation of lack of availability of chairs and availability of stool, and costs etc (see images).

Condition report: In extremely good overall condition, 2 visible marks to velvet top, some looseness to all leg joints, some minor knocking to legs, dust cover with some minor staining.

The Coronation of HM Queen Elizabeth II was held on 2ndJune 1953 at Westminster Abbey.

The Coronation ceremony was a very large celebration with several thousand distinguished guests in attendance. To design such a large and important ceremony it was over a year in the planning with Prince Philip acting as Chairman of the Coronation Commission.

The design of the chairs and stools produced for the ceremony was taken from those created for the King George VI Coronation in 1937.

Furniture manufacturers based in High Wycombe, the centre of English chair making during this period, as had been the case for George VI coronation, produced all of the chairs and stools. The Ministry of Works were responsible for commissioning all furnishings for the coronation.A range of companies manufactured the furniture including;B. North & Sons; W. Hands & Sons; Thomas Glenister Ltd.; Castle Bros. (all firms in High Wycombe); Maple & Co., and Waring & Gillow. The blue velvet coverings were made at Listers Mills in Bradford, Yorkshire.

These chairs and stools were used by distinguished guests during the coronation ceremony and were available for attendees to purchase after the event (as a way to help fund the ceremony itself which cost over £1.5 million in 1953).

The Ministry of Works in order to recoup even further costs, made available to buy those pieces not purchased by guests immediately after the event.

For a similar stool see the National Trust Collection at Dunham Massey, Cheshire.http://www.nationaltrustcollections.org.uk/object/930899

For further pieces of Coronation furniture included in our store see:

Condition Report: In extremely good overall condition, 2 visible marks to velvet top, some looseness to all leg joints, some minor knocking to legs, dust cover with some minor staining.