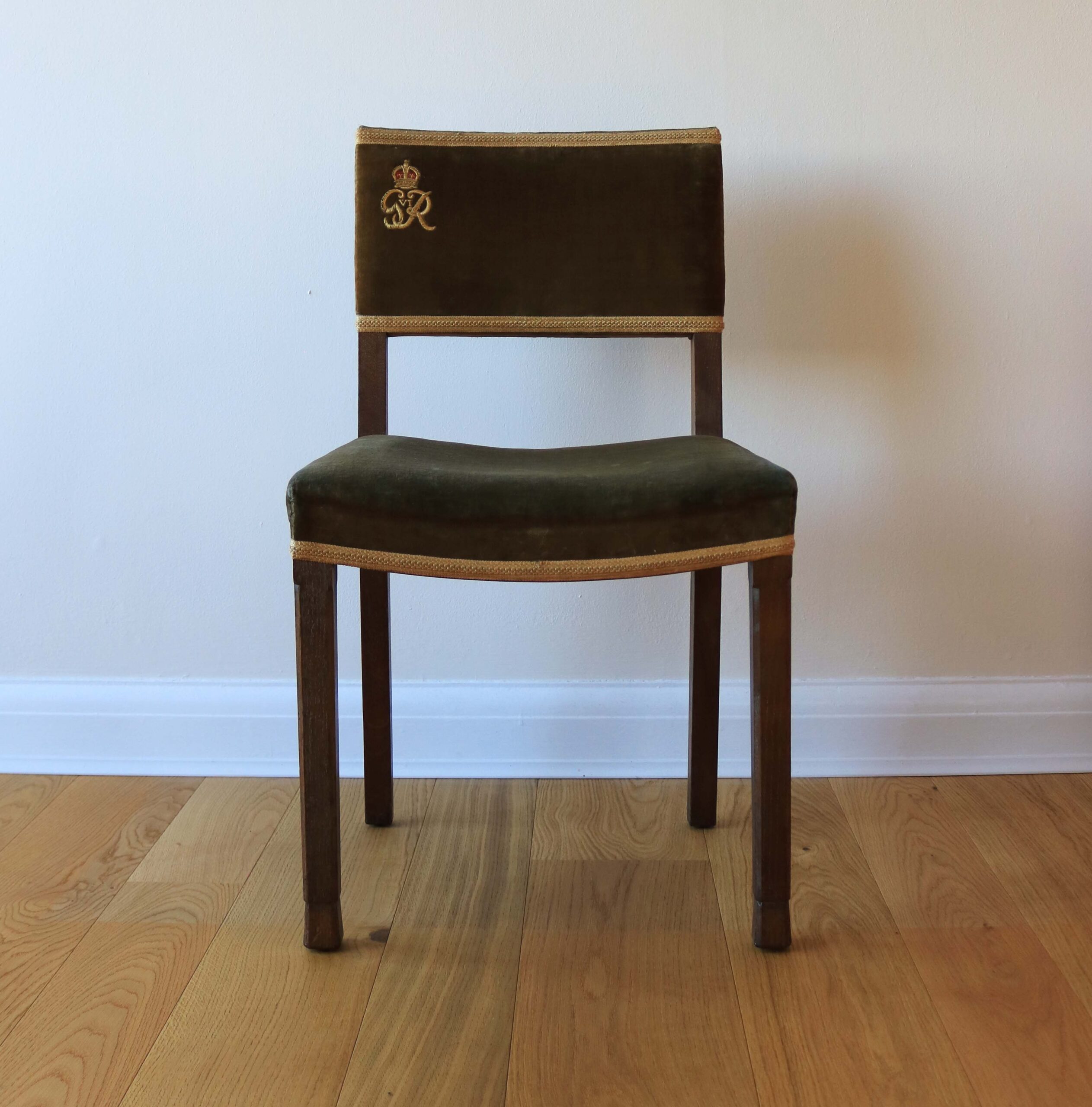 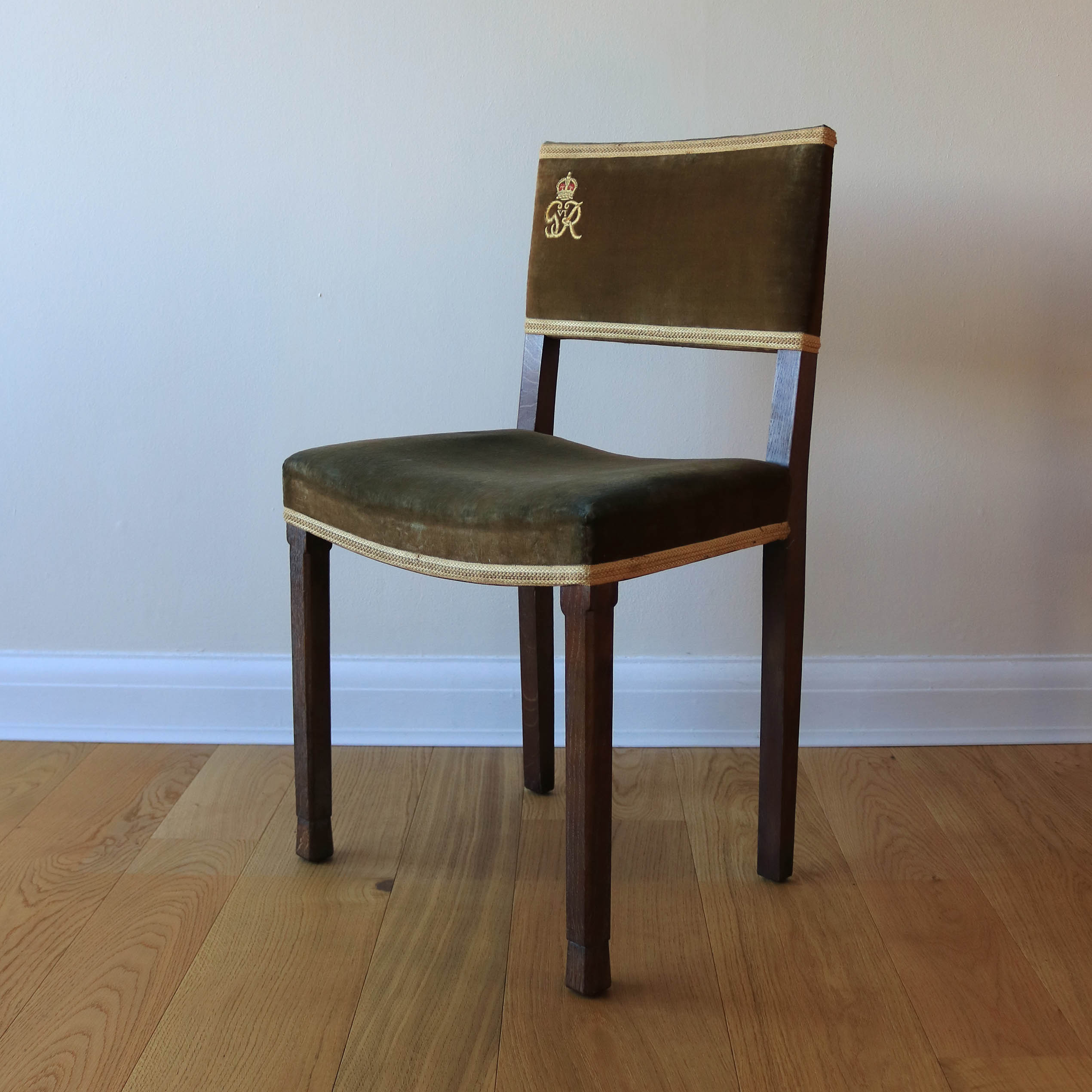 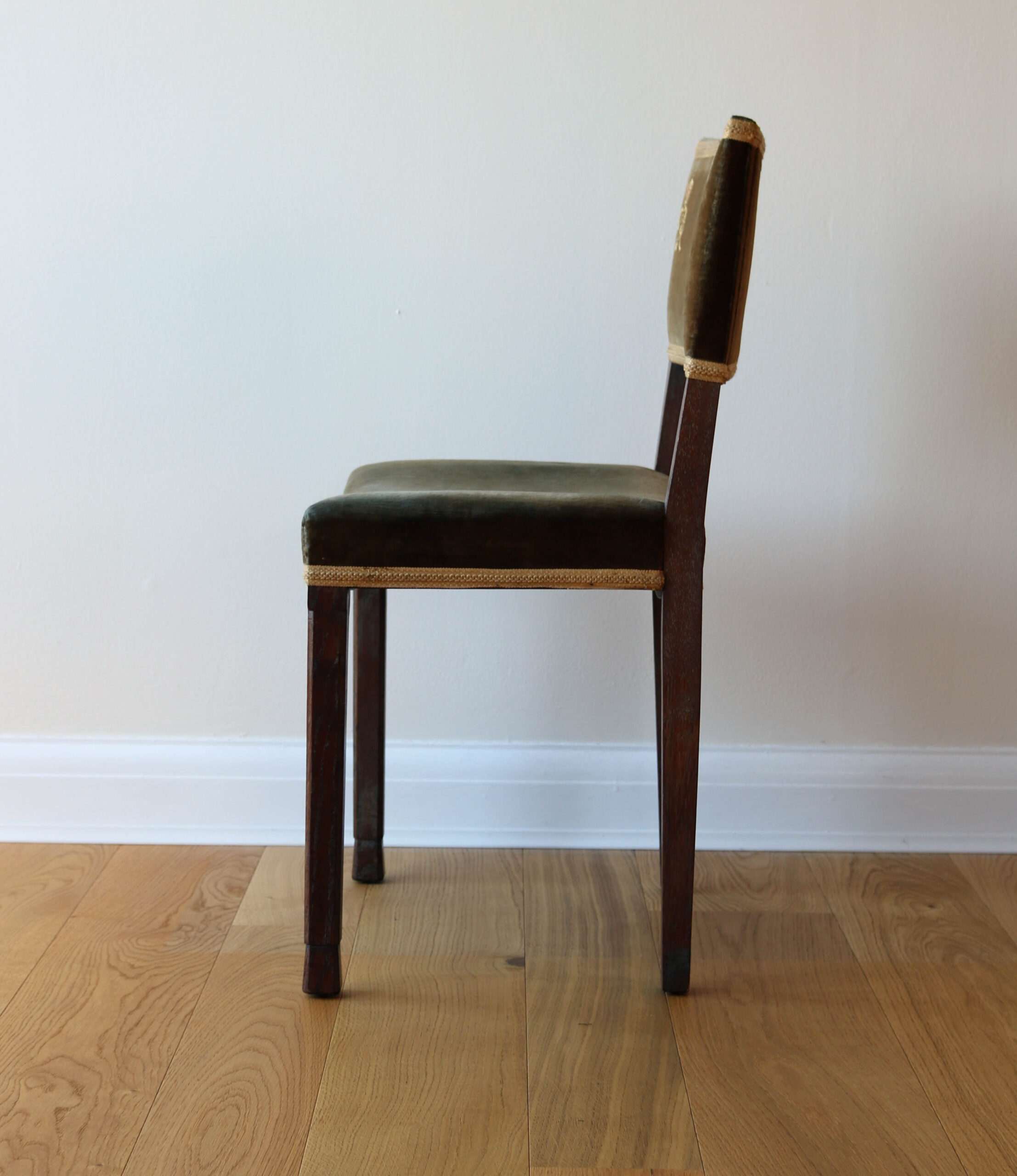 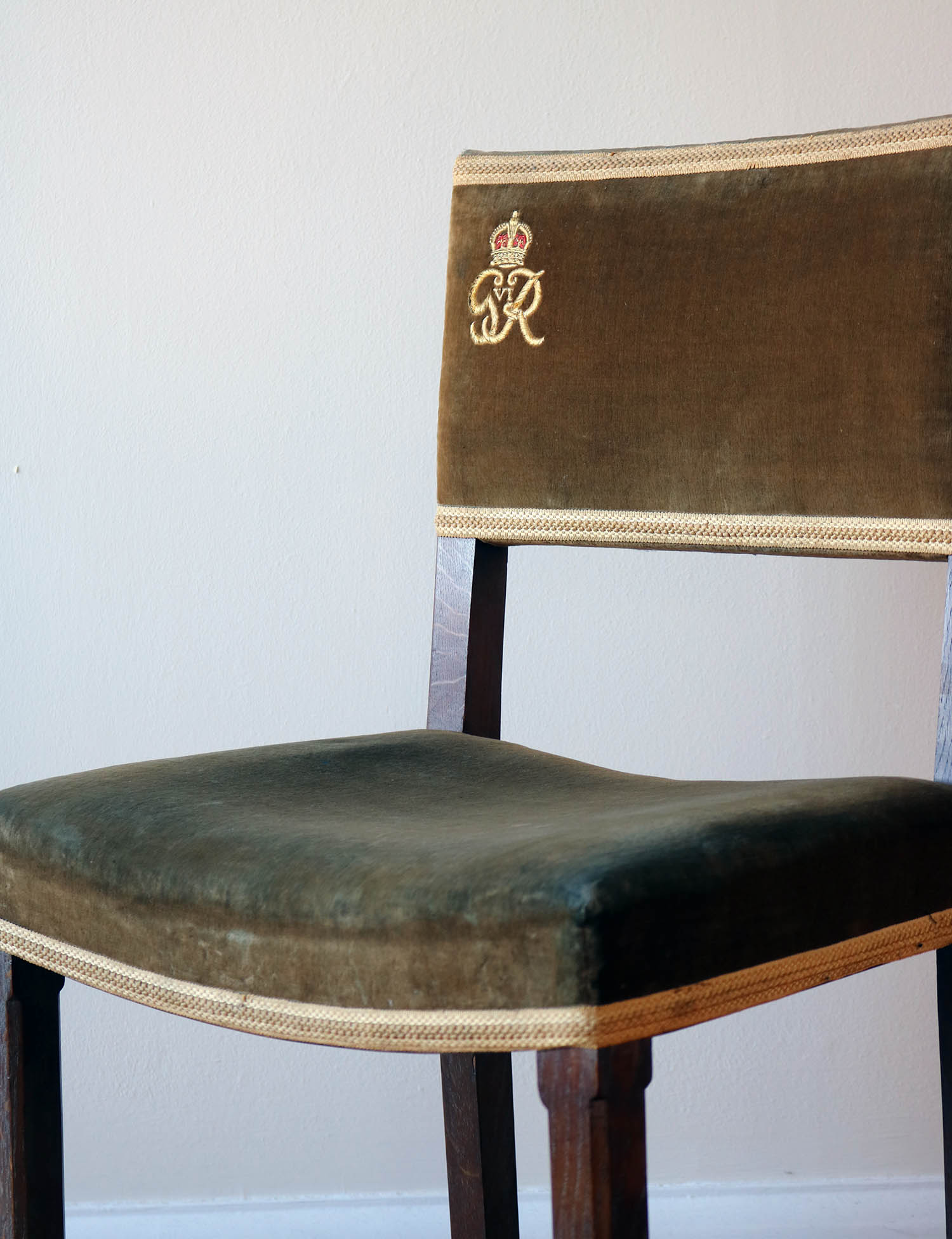 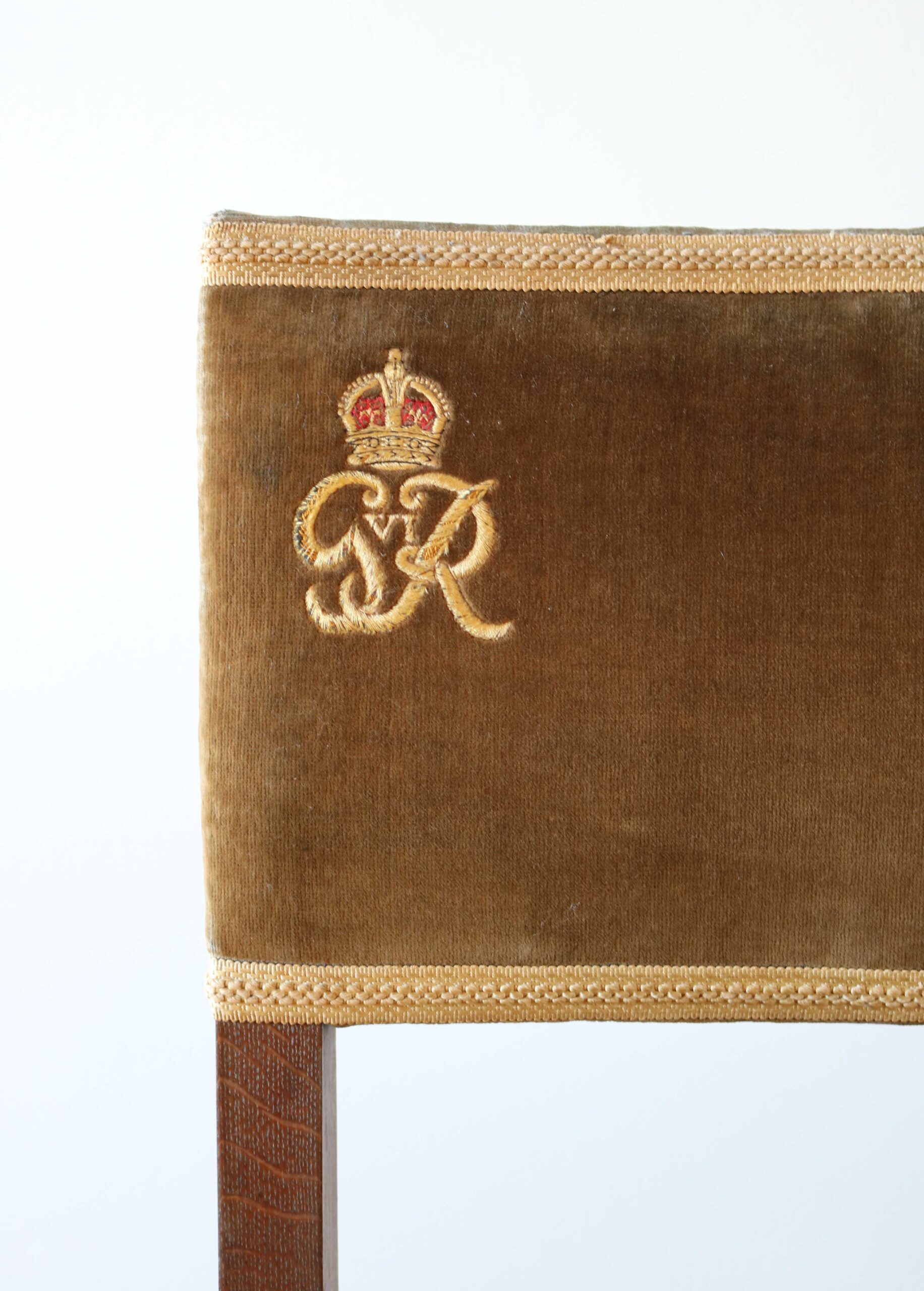 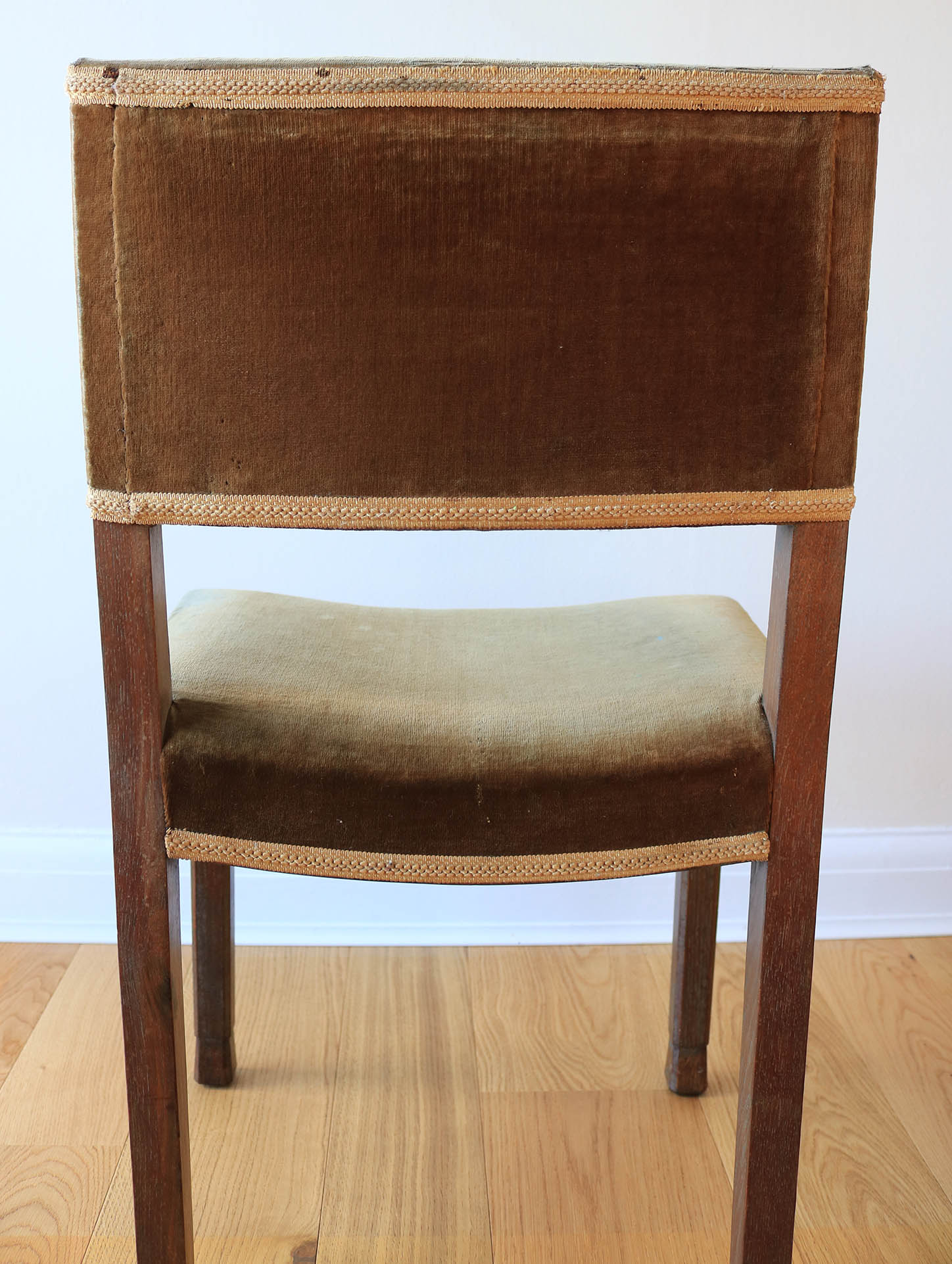 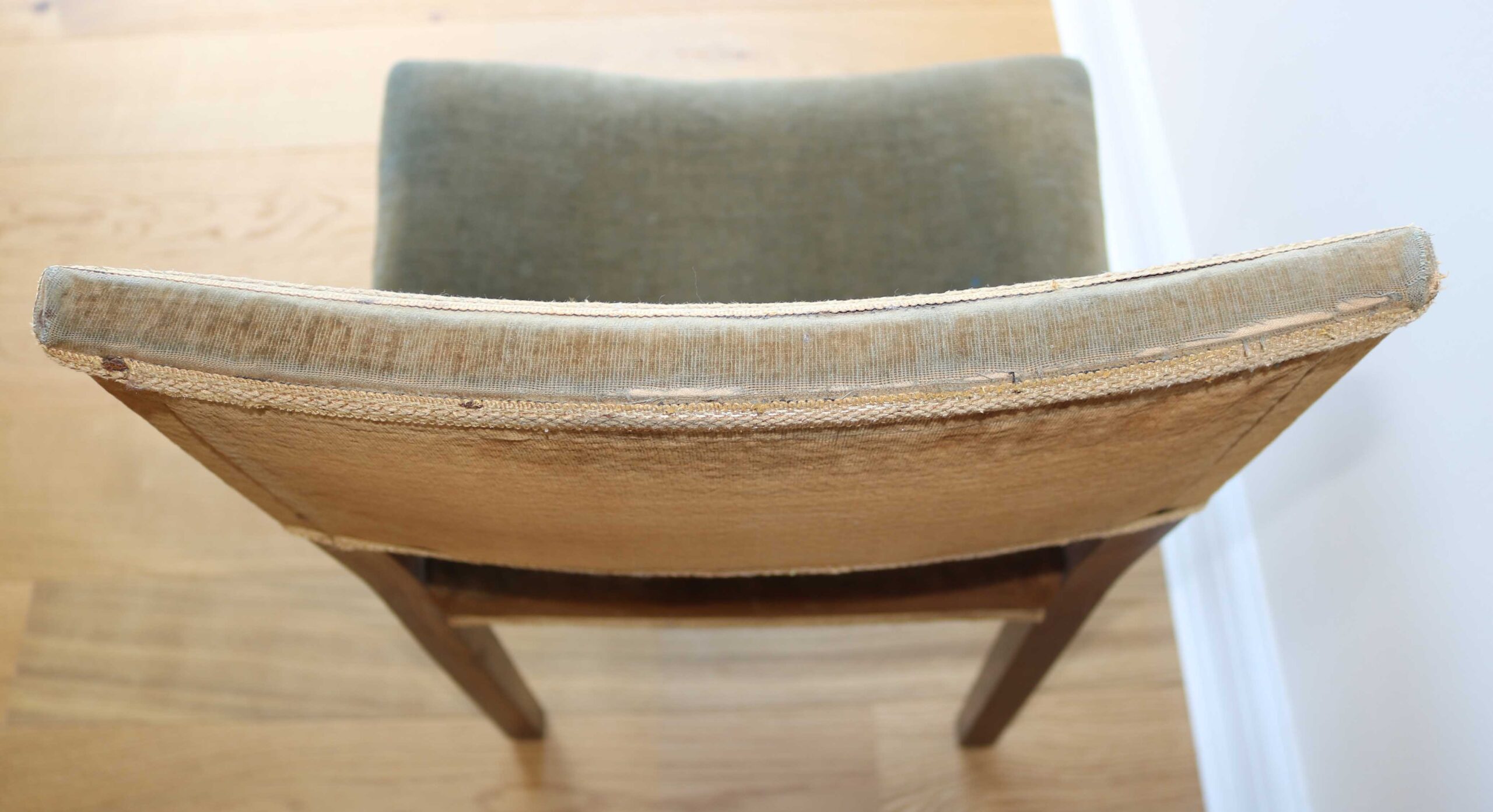 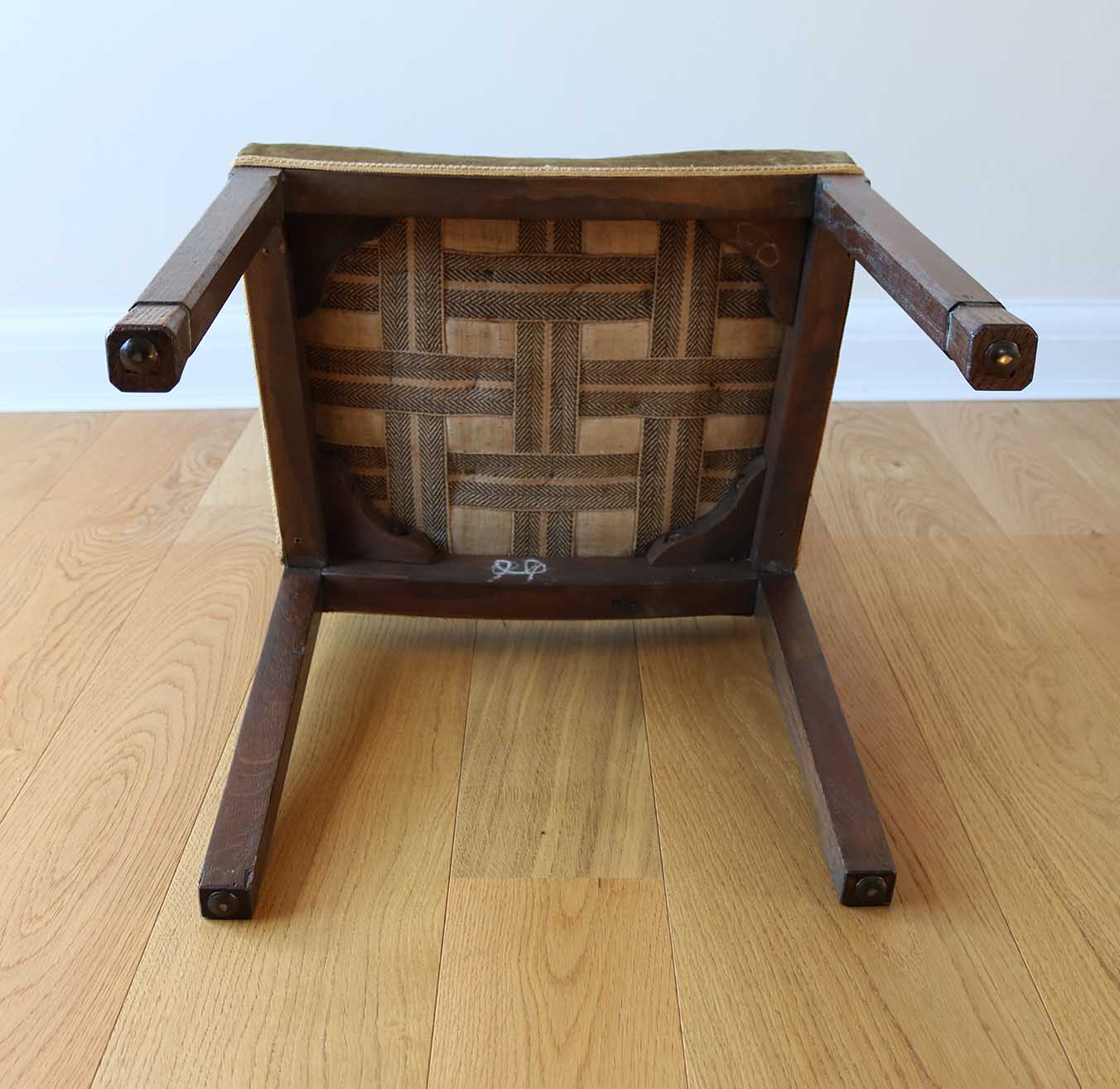 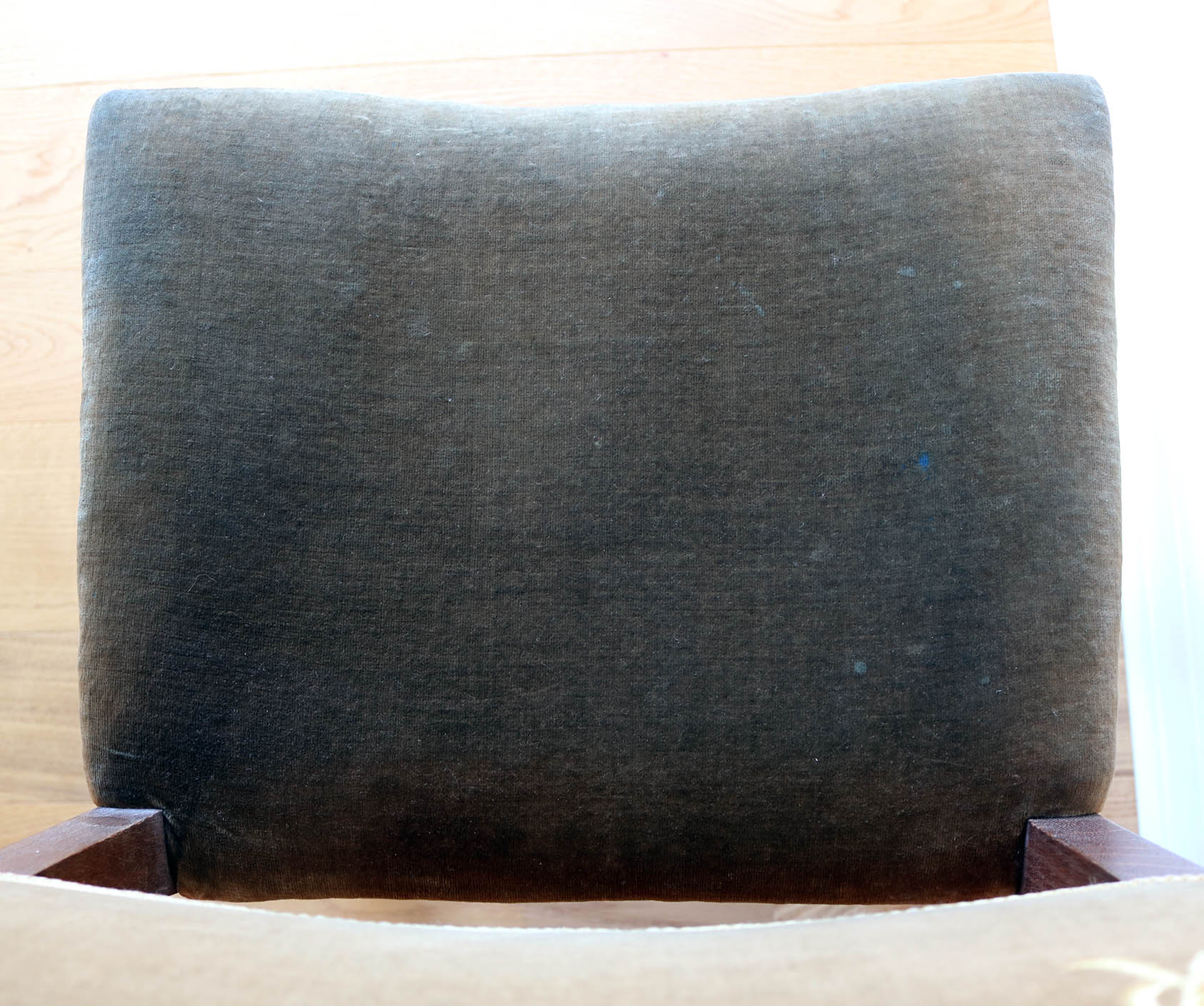 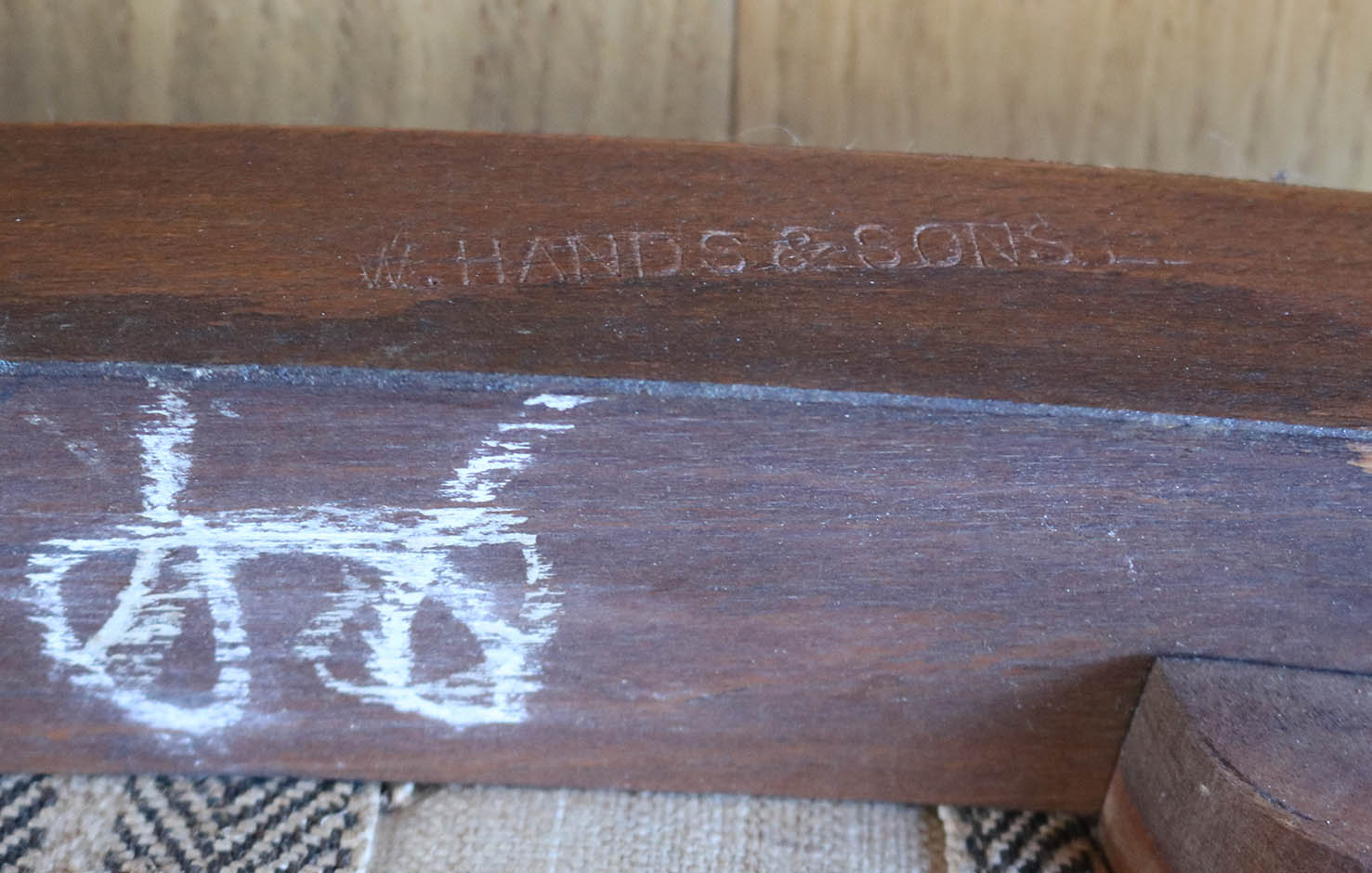 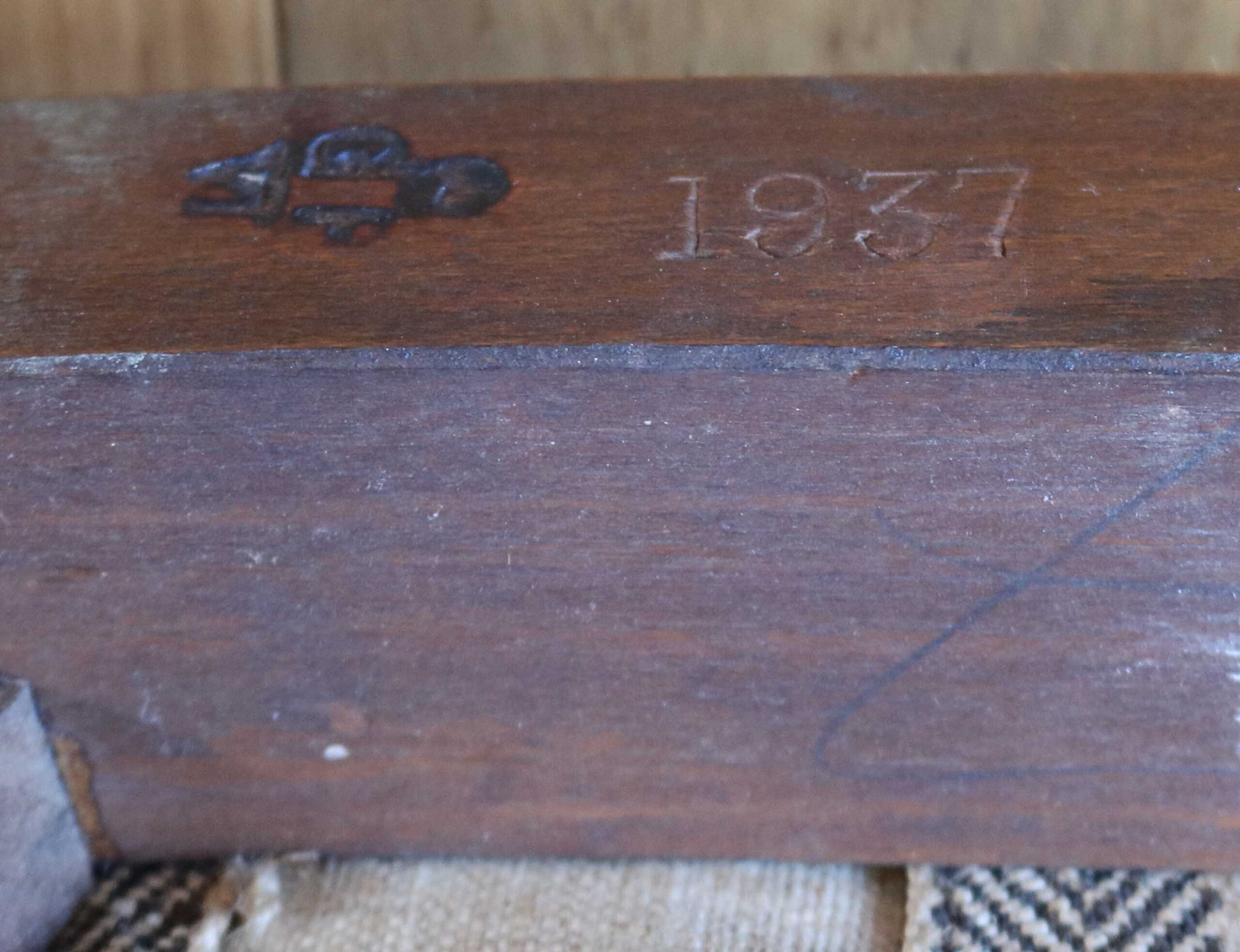 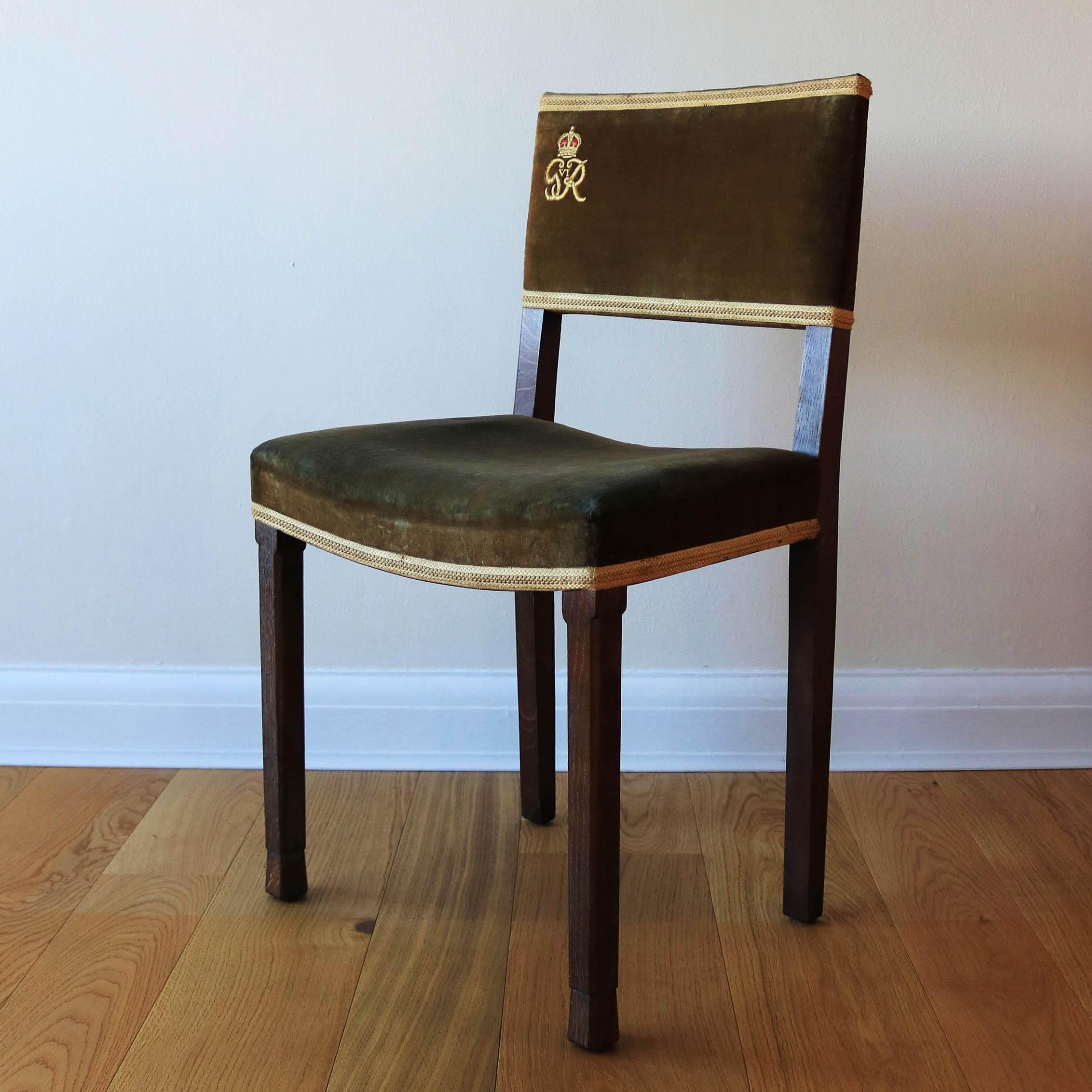 The frame in limed oak with seat and back rest upholstered in aged green velvet, trimmed with gold braid. The backrest is embroidered with GVI cypher, underside stamped with makers name “W. Hands & Son”, ‘1937’ and GVI cypher. The back leg is additionally stamped “2”.

The Coronation of George VI and Elizabeth

The Coronation of King George VI and Queen Elizabeth was held on 12thMay 1937. The event was to be a grand spectacle of Royal pageantry and was one of the first large events to be filmed as an outside broadcast for BBC Television (which was then in its infancy).

The Coronation of George VI was to be a grand and traditional affair, in the mould of the coronation of his father George V. The ceremony was held on the exact date it was planned for Edward VIII’s Coronation. George VI had been heavily involved with the plans for his brother’s coronation. Edward VIII had desired to have no coronation ceremony at all, and only agreed upon a paired down service. After the abdication crisis it was agreed the event would go ahead on the same date and on a larger scale. Queen Mary took great interest in the design of the furniture for the ceremony and ensured it had a traditional feel in keeping with previous coronation ceremonies.

These chairs were used by distinguished guests during the coronation ceremony and were available for attendees to purchase after the event (as a way to help fund the ceremony itself). Originally the fabric would have had a blue tone, but typically over time all have faded to a green.

Queen Mary herself sat on an identical chair during the ceremony. The chair was sold at Christies as part of the Collection of H.R.H. The Princess Margaret, Countess of Snowdon in 2006 for over £38,000.

For more pieces of Coronation furniture included in our store see:

Condition report: Overall condition good, wear to the velvet particularly to the top of the back rail, some staining to seat. Some wear and loss to braid on back of chair (see images).

Condition Report: Condition report: Overall condition good, wear to the velvet particularly to the top of the back rail, some staining to seat. Some wear and loss to braid on back of chair (see images).